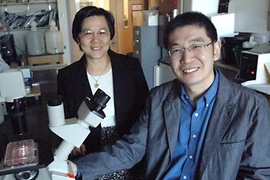 ↓ Download Image
Caption: Dr. Jane-Jane Chen and post-doc Sijin Liu of the Harvard-MIT Division of Health Sciences and Technology. Their research team has identified a protein that is key in regulating iron recycling in blood, and could lead to therapeutic drugs for certain blood diseases.
Credits: Photo / Donna Coveney

Caption:
Dr. Jane-Jane Chen and post-doc Sijin Liu of the Harvard-MIT Division of Health Sciences and Technology. Their research team has identified a protein that is key in regulating iron recycling in blood, and could lead to therapeutic drugs for certain blood diseases.
Credits:
Photo / Donna Coveney

MIT scientists have uncovered a protein that plays a key role in the recycling of iron from blood.

Their work, described in the October 11 Journal of Clinical Investigation, could lead to new therapies for certain inherited blood disorders such as beta-thalassemia, a condition that causes chronic anemia. The team is led by Jane-Jane Chen, a principal research scientist in the Harvard-MIT Division of Health Sciences and Technology (HST).

Two years ago Chen and colleagues showed that a protein, heme-regulated eukaryotic translational initiation factor 2 a-subunit (eIF2-alpha) kinase, or HRI for short, keeps mice with beta-thalassemia alive. This protein minimizes an abnormal and toxic imbalance of globin chains, the protein base for the hemoglobin found in red blood cells. Hemoglobin carries oxygen to our organs and carts away carbon dioxide waste.

In the new work, the team has found that HRI also plays a key role in the body's iron recycling process. Chen observed that this process falters in mice lacking HRI. As a result, less iron was available for use in the creation of new red blood cells.

A closer look revealed that HRI influences two mechanisms in this recycling process. First, a lack of HRI reduces levels of another protein called hepcidin. Hepcidin, recently discovered to be the master regulator of the iron cycle, releases iron from stores in the body and makes it available to be processed into hemoglobin. Without hepcidin, the body retains iron, but never puts it to work.

The team also found that HRI, which is expressed predominantly in the precursors of red blood cells, is expressed in macrophages. Macrophages are cells that literally reach out and grab dying red blood cells and eat them, digesting them and releasing the iron from their hemoglobin back into the system.

A lack of HRI causes these macrophages to lose their appetite, gobbling down fewer red blood cells. Instead of being digested and recycled, the red blood cells die and end up excreted through the kidneys. The result is a net loss of iron from the body.

With this new understanding of HRI's dual role in iron recycling--that it both keeps iron in the body and puts it to work--Chen is conducting a search for small molecules that might modulate the HRI signaling pathway. In turn, these compounds could potentially help diseased precursors of red blood cells survive and boost the iron recycling process.

"Perhaps we will find a compound that could help patients with beta-thelassemia or other diseases where HRI plays a role," said Chen. Such conditions include a genetic disorder called erythropoietic protoporphyria (EPP), which causes photosensitivity and liver disease, as well as a condition called the anemia of inflammation in which the iron recycling process breaks down under the influence of stress, chronic disease, aging, or cancer.

The work was funded by the National Institutes of Health and the Cooley's Anemia Foundation.