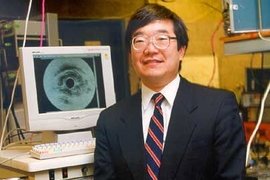 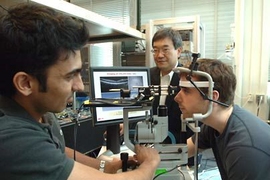 ↓ Download Image
Caption: Professor James Fujimoto, center, with students using the eye-imaging technique he began developing in the early 1990s. With his head in the apparatus is Desmond C. Adler and at left, taking measurements, is Vivek Srinivasan. Adler and Sriinivasan are both graduate students in electrical engineering and computer science.
Credits: Photo / Donna Coveney 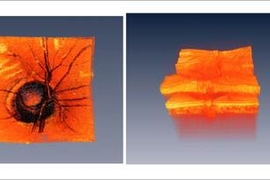 Caption:
Professor James Fujimoto, center, with students using the eye-imaging technique he began developing in the early 1990s. With his head in the apparatus is Desmond C. Adler and at left, taking measurements, is Vivek Srinivasan. Adler and Sriinivasan are both graduate students in electrical engineering and computer science.
Credits:
Photo / Donna Coveney

In work that could improve diagnoses of many eye diseases, MIT researchers have developed a new type of laser for taking high-resolution, 3-D images of the retina, the part of the eye that converts light to electrical signals that travel to the brain.

The research will be presented at the Conference on Lasers and Electro-Optics and the Quantum Electronics and Laser Science Conference in Baltimore on May 10.

The new imaging system is based on Optical Coherence Tomography (OCT), which uses light to obtain high-resolution, cross-sectional images of the eye to visualize subtle changes that occur in retinal disease. OCT was developed in the early 1990s by MIT Professor James Fujimoto, Eric Swanson at MIT Lincoln Laboratory and collaborators; Fujimoto is an author of the report to be presented in May.

"Within the last few years optical coherence tomography has become a standard diagnostic for ophthalmology. New techniques are now enabling dramatic increases in image acquisition speeds. These advances promise to enable new and powerful three-dimensional visualization methods which could improve early diagnosis of disease and treatment monitoring," said Fujimoto, who holds appointments in MIT's Department of Electrical Engineering and Computer Science and the Research Laboratory of Electronics.

Conventional OCT imaging typically yields a series of two-dimensional cross-sectional images of the retina, which can be combined to form a 3-D image of its volume. The system works by scanning light back and forth across the eye, measuring the echo time delay of reflected light along micrometer-scale lines that, row by row, build up high-resolution images.

Commercial OCT systems scan the eye at rates ranging from several hundred to several thousand lines per second. But a typical patient can only keep the eye still for about one second, limiting the amount of three-dimensional data that can be acquired.Â

Now, using the new laser, researchers in Fujimoto's group report retinal scans at record speeds of up to 236,000 lines per second, a factor of 10 improvement over current OCT technology.

Future clinical studies, as well as further development, may someday enable ophthalmologists to routinely obtain three-dimensional "OCT snapshots" of the eye, containing comprehensive volumetric information about the microstructure of the retina. Such snapshots could potentially improve diagnoses of retinal diseases such as diabetic retinopathy, glaucoma and age-related macular degeneration.

Fujimoto's colleagues on the work are Robert Huber, a visiting scientist at MIT now at the Ludwig-Maximilians University in Germany, Desmond C. Adler and Vivek Srinivasan. Adler and Srinivasan are both graduate students in EECS.

The current research was sponsored by the National Science Foundation, the National Institutes of Health and the Air Force Office of Scientific Research.

A version of this article appeared in MIT Tech Talk on May 2, 2007 (download PDF).