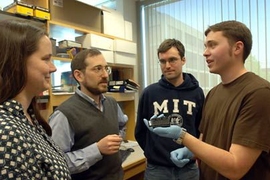 Scientists often study mice as a model for human biology and disease, because their basic biological processes are assumed to be essentially the same as those of humans.

But now, a team of MIT researchers has uncovered a surprising difference. In a study of gene regulation in mouse and human liver cells, they found that master regulatory proteins function in very different ways in mice and humans.

"Evolution has discovered several different ways to make a liver from the same building blocks," said Ernest Fraenkel, MIT assistant professor of biological engineering and leader of the research team. "Comparing these different ways of regulating genes may unlock some of nature's most closely guarded secrets."

The work, which will be published in the May 21 online edition of Nature Genetics, could help identify patterns in the extremely complicated control mechanisms involved in gene expression.

"You can think of it as two different dialects of the same language. By exploring the human and mouse versions, we hope to find an underlying grammar," said Fraenkel.

Every cell in the human (or mouse) body has the same collection of genes, but the genome of each cell is carefully regulated so that only certain genes are expressed. Regulatory proteins known as transcription factors control this expression by binding to specific locations within the genome and turning nearby genes on or off.

The researchers and their colleagues had previously worked out many aspects of gene regulation in the human liver, which is one reason the researchers chose to study the liver. In the current study they compared 4,000 human genes with nearly identical counterparts, known as homologous genes, from mouse liver cells.

Given the similarity between the two species' DNA sequences, the researchers expected that transcription factors would bind to the same sites in most pairs of homologous genes. To their surprise, they found that most of the binding sites--between 41 percent and 89 percent, depending on the transcription factor--were in different locations in humans and mice.

"The number of genes with the identical regulation in both species was very, very small," Fraenkel said.

Before they began, the researchers expected to see some differences in gene regulation between mice and humans, because the human liver has evolved to process cooked food, said Fraenkel. However, the magnitude of change was much higher than they anticipated.

Fraenkel speculated that the changes accumulated without having much of an effect on gene expression. Unless the location of binding sites affects gene expression, it is not under any natural selection pressure.

All of that meaningless variation makes it harder to identify the small number of genes where binding site migrations do have an evolutionary impact, because they are being drowned out by all the insignificant changes, Fraenkel said. In future studies, the research team plans to investigate why some genes' binding sites are conserved over time while others shift.

"We want to understand what's special about those genes," Fraenkel said.
Fraenkel said the results should provide guidance for researchers who study mice to better understand human biology. "To get the most out of mice for biomedical research we need to fully map out the regulation in both organisms," he said.

Lead authors on the paper are Duncan Odom, a former postdoctoral associate at the Whitehead Institute for Biomedical Research now at Cancer Research UK, and Robin Dowell, a postdoctoral fellow in MIT's Computer Science and Artificial Intelligence Laboratory.

Other authors are Elizabeth Jacobsen and Caitlin Conboy, technical assistants at the Whitehead Institute; William Gordon, a technical assistant in the Department of Biological Engineering; Timothy Danford, Kenzie MacIsaac and Alexander Rolfe, graduate students in electrical engineering and computer science; and David Gifford, professor of electrical engineering and computer science.

The research was funded by the National Institutes of Health, Cancer Research UK and the Whitaker Foundation.