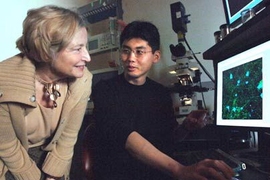 Caption:
Martha Constantine-Paton, an MIT professor of biology and principle investigator in the McGovern Institute for Brain Research at MIT, and research scientist Akira Yoshii have discovered a new molecular pathway that helps solve the puzzle of how neurons form synapses.
Credits:
Photo / Donna Coveney

Scientists are keenly studying how neurons form synapses--the physical and chemical connections between neurons--and the "pruning" of neural circuits during development, not least because synaptic abnormalities may partially underlie many developmental and neurodegenerative diseases.

Several key molecules are involved in normal synaptic formation, but their interactions are not well understood. Now MIT neuroscientists have taken an important step toward solving this challenging jigsaw puzzle. They have pieced together a direct linear pathway connecting three molecules involved in synaptic formation, to be reported in the May 21 advance online publication of Nature Neuroscience.

"We haven't solved the whole puzzle yet," cautions Martha Constantine-Paton, a developmental neuroscientist in the McGovern Institute for Brain Research at MIT, professor in the Department of Biology and senior author of the paper. "But we do now have a broader view of what happens in synaptic plasticity (adaptability). More importantly, we have an exciting model of this new pathway's role in development and learning. We hope this study might advance the study of normal, healthy brain development in people so that we may be able to prevent or treat many devastating developmental neurological disorders."

Constantine-Paton and her co-author, Akira Yoshii, a pediatric neurologist and research scientist in her lab, use the rodent visual pathway as an accessible model for studying how the signaling properties of synapses change during development and how those changes relate to structural changes in the brain and developmental milestones in behavior.

Specifically, they focus on a major developmental event--eye opening, which in rodents happens after birth and is followed by rapid increases in synapse strength and visual circuit refinement that follow the onset of visual stimulation. Previously, the authors had discovered a possible mechanism for that increase in synaptic strength. Namely, a protein called PSD-95 rushes to the synapses within hours of eye opening. PSD-95 is a scaffold that anchors, among other things, two classes of receptors for the neurotransmitter glutamate, which triggers the cell's electrical activity during development and learning. Curiously, PSD-95 also held the receptor for BDNF (TrkB), an important factor that is necessary for synaptic strengthening during development and learning.

In the current work, the researchers set out to explore the relationship between BDNF and PSD-95. In so doing, they defined an entirely new pathway that may explain an intriguing phenomenon in development.

In short, stimulating visual neurons initiates a positive feedback loop, starting with one class of glutamate receptors known as NMDA receptors, which activate BDNF. BDNF triggers a signaling pathway involving another well-studied duo, PI3 kinase/AKT. That pathway causes more PSD-95, and with it more receptors for BDNF, to accumulate at the synapse within one hour of stimulation. As a result, the synapse becomes more responsive to BDNF, which sends more PSD-95 to the synapse.

Surprisingly, stimulating just a few synapses with BDNF sends more PSD-95 to excitatory synapses throughout the entire neuron within the hour. This newly described pan-neuron effect of local synaptic stimulation is similar to "synaptic tagging," which is a mechanism originally proposed to explain how a few very active synapses can prime larger regions of a neuron for long-term synaptic strengthening in response to subsequent stimulation.

"A mechanism like the BDNF/PSD-95 pathway could account for numerous observations at the cellular level in animal models, or during behavioral development in young children," explains Yoshii. "Namely, the development of particular neurological connections or skills does not occur gradually over time. Instead such changes tend to occur suddenly, appearing in short intervals after robust stimulation. It is as if there is a single important trigger and then a functional circuit rapidly comes online."