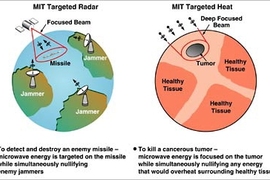 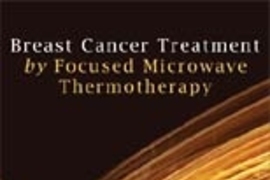 Caption:
Image at left shows process of detecting and destroying an enemy missile using MIT targeted radar. Microwave energy is fixed on a missile while simultaneously nullifying enemy jammers. On right, microwave energy is aimed at a cancerous tumor with a deep focused beam while simultaneously nullifying any energy that would overheat surrounding healthy tissue.
Credits:
Image courtesy / Lincoln Laboratory

A breast cancer treatment based on MIT research originally intended for detecting missiles is documented in a new book by Alan J. Fenn, an MIT researcher and inventor of the technique.

The book, "Breast Cancer Treatment by Focused Microwave Thermotherapy" (Jones and Bartlett Publishers, 2007), includes a discussion of promising results from the latest clinical trials of the therapy.

Treating cancer with heat is not a new idea, but "researchers were having trouble using it to treat tumors deep within the body," said Fenn. Further, it's difficult to deliver the heat only to cancer cells without overheating normal tissue.

The microwaves in the new technique heat--and kill--cells containing high amounts of water and ions, or electrically charged atoms. Cancer cells typically have a high content of both, while healthy breast tissue contains much less. The outpatient procedure uses a single tiny needle probe to sense and measure parameters during treatment. Side effects appear to be minimal.

This result is important for two reasons. First, additional breast surgery is often recommended for patients with cancer cells close to the edge of the lumpectomy surgical margin. Second, there is a higher risk of local recurrence of the breast cancer when cancer cells are found at the surgical margins. Fenn noted that all patients in both arms of the study received postoperative radiation therapy to reduce the risk of local recurrence.

Also presented in the new book are preliminary results for a study of the treatment in combination with preoperative chemotherapy for breast cancer patients with large tumors. "In this small feasibility study of 28 patients, one of the principal objectives was to increase tumor shrinkage with the combined use of focused microwave thermotherapy and preoperative chemotherapy," Fenn said.

The results of both clinical studies will be presented at the 17th Annual National Interdisciplinary Breast Center Conference in Las Vegas, from Feb. 25-28.

Another, larger clinical study for patients with large breast cancer tumors is expected to begin later this year at six institutions in the United States and Canada.

Other potential clinical studies for treating recurrent breast cancer, ductal carcinoma in situ and benign breast lesions with the MIT thermotherapy treatment, as well as its use to enhance anti-estrogen therapy for breast cancer prevention, are also described in the book.