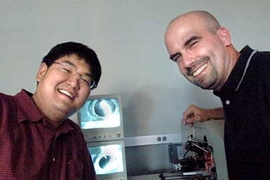 ↓ Download Image
Caption: Paul Huang, graduate student in biological engineering, left, and Professor Forest White of biological engineering with a mass spectrometer showing the electrospray ionization tip of a liquid chromatography column. Samples are loaded on the column and electrosprayed into the mass spectrometer, where their mass and sequence is identified, allowing White and Huang to analyze the sample.
Credits: Photo / Donna Coveney

Caption:
Paul Huang, graduate student in biological engineering, left, and Professor Forest White of biological engineering with a mass spectrometer showing the electrospray ionization tip of a liquid chromatography column. Samples are loaded on the column and electrosprayed into the mass spectrometer, where their mass and sequence is identified, allowing White and Huang to analyze the sample.
Credits:
Photo / Donna Coveney

MIT researchers have identified a critical link between two proteins found in brain tumors, a discovery that could eventually help treat a form of brain cancer that kills 99 percent of patients.

Glioblastoma multiforme (GBM), the most aggressive brain tumor in adults, strikes about 15,000 people in the United States each year. GBM is currently treated with a combination of surgery, radiation and chemotherapy, but those treatments have proven ineffective. Most patients die within a year.

Now, MIT scientists have uncovered a connection between two proteins found in the tumor cells, and they have demonstrated that attacking both of those proteins kills tumor cells much more effectively than targeting either one alone.

The researchers, led by Forest White, MIT associate professor of biological engineering, report their findings in the early online edition of the Proceedings of the National Academy of Sciences for the week of July 16-20.

Their work could guide drug developers seeking treatments for GBM, which has proven resistant to all drugs that have been tried against it.

The team focused on a protein called EGFRvIII, a mutated form of the cell receptor for epidermal growth factor (EGF). The mutated receptor, which is found in approximately a quarter of GBM tumors, is continuously active and relentlessly pushes cells to keep growing and dividing.

Doctors have tried treating GBM patients with drugs that inhibit EGFRvIII, but they have had little effect. This could be because the continuous stimulation of the receptor is so intense and because the receptor interacts with numerous other proteins that also promote tumor growth, White said.

The researchers believe it is the cumulative action of EGFRvIII and those other proteins that leads to tumor growth.

"It seems that it is not the activation of one receptor that results in cancer. It's the action of multiple receptors that leads to the tumors we see," said Paul Huang, a graduate student in biological engineering and lead author of the paper. "A potential way to overcome this is to attack multiple targets instead of just one."

To find out what other proteins are involved in tumor growth, the researchers used a tool known as mass spectrometry to analyze the network of proteins activated by EGFRvIII in GBM tumor cells.

They found that when EGFRvIII is activated, so is another receptor called c-Met. C-Met is normally active during human development, but it's turned off in most adult cells.

Until now, there had been no evidence of any "cross-talk" between c-Met and EGFRvIII in GBM. This discovery could offer an explanation for why GBM tumors are so invasive, because over-activated c-Met has already been implicated in very invasive types of lung and breast cancers.

The researchers don't know yet how EGFRvIII is activating c-Met, and whether other proteins are involved in the activation.

"The mechanism underlying this control has yet to be fully characterized," said White. "Our data shows that as EGFRvIII is activated, c-Met is activated as well. Whether it's direct, or indirect, is something that we are currently deciphering."

The new knowledge of c-Met's involvement could give researchers a potent tool to attack GBM tumors. When the MIT group treated tumor cells with drugs that inhibit EGFRvIII and c-Met, respectively, much lower doses were required to kill the cells than when either drug was given alone.

There are several EGFRvIII inhibitors in clinical trials now, and some have already been approved to treat other cancers. Drug companies are also working on c-Met inhibitors, and Huang estimated that some might be available in five to 10 years.

Other MIT authors on the paper are Ryan Flynn, a sophomore biology major, and Zachary Brewer, a senior chemical engineering major. This work was performed in collaboration with researchers at the Ludwig Institute of Cancer Research (San Diego Branch) led by Webster Cavenee and Frank Furnari. The research was funded by the National Cancer Institute, the National Institutes of Health and the Goldhirsh Foundation.