Blood may help us think 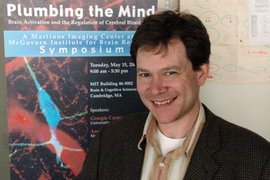 MIT scientists propose that blood may help us think, in addition to its well-known role as the conveyor of fuel and oxygen to brain cells.

"We hypothesize that blood actively modulates how neurons process information," Christopher Moore, a principal investigator in the McGovern Institute for Brain Research at MIT, explained in an invited review in the October issue of the Journal of Neurophysiology. "Many lines of evidence suggest that blood does something more interesting than just delivering supplies. If it does modulate how neurons relay signals, that changes how we think the brain works."

According to Moore's Hemo-Neural Hypothesis, blood is not just a physiological support system but actually helps control brain activity. Specifically, localized changes in blood flow affect the activity of nearby neurons, changing how they transmit signals to each other and hence regulating information flow throughout the brain. Ongoing studies in Moore's laboratory support this view, showing that blood flow does modulate individual neurons.

Moore's theory has implications for understanding brain diseases such as Alzheimer's, schizophrenia, multiple sclerosis and epilepsy. "Many neurological and psychiatric diseases have associated changes in the vasculature," said Moore, who is also an assistant professor in MIT's Department of Brain and Cognitive Sciences.

"Most people assume the symptoms of these diseases are a secondary consequence of damage to the neurons. But we propose that they may also be a causative factor in the disease process, and that insight suggests entirely new treatments." For example, in epilepsy people often have abnormal blood vessels in the brain region where the seizures occur, and the hypothesis suggests this abnormal flow may induce epileptic onset. If so, drugs that affect blood flow may provide an alternative to current therapies.

The hypothesis also has important implications for functional magnetic resonance imaging, or fMRI, a widely used brain scanning method that indicates local changes in blood flow. "Scientists looking at fMRI currently regard blood flow and volume changes as a secondary process that only provides read-out of neural activity," explained Rosa Cao, a graduate student in Moore's lab and co-author of the paper. "If blood flow shapes neural activity and behavior, then fMRI is actually imaging a key contributor to information processing."

Again, studies in Moore's lab support this interpretation. For example, his fMRI studies of the sensory homunculus--the brain's detailed map of body parts like fingers, toes, arms, and legs--show that when more blood flows to the area representing the fingertip, people more readily perceive a light tap on the finger. This suggests that blood affects the function of this brain region and that information about blood flow can predict future brain activity. This finding does not undermine prior studies, but adds another, richer layer to their interpretation and makes fMRI an even more useful tool than it already is.

How could blood flow affect brain activity? Blood contains diffusible factors that could leak out of vessels to affect neural activity, and changes to blood volume could affect the concentration of these factors. Also, neurons and support cells called glia may react to the mechanical forces of blood vessels expanding and contracting. In addition, blood influences the temperature of brain tissue, which affects neural activity.

To Moore's knowledge, the Hemo-Neural Hypothesis offers an entirely new way of looking at the brain. "No one ever includes blood flow in models of information processing in the brain," he said. One historical exception is the philosopher Aristotle, who thought the circulatory system was responsible for thoughts and emotions. Perhaps the ancient Greeks were on to something.

This work was funded by Thomas F. Peterson, the Mitsui Foundation and the McGovern Institute for Brain Research at MIT.