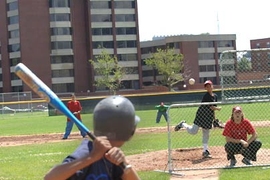 ↓ Download Image
Caption: Alex Nickerson is at bat as Jordan Smith pitches to him on Briggs Field at MIT. The two middle school students are participating in MIT's summer Science of Baseball program, which, each morning, teaches them things like how a curve ball works and how to calculate player statistics. In the afternoon, they put their new knowledge to work on the field.
Credits: Photo / Donna Coveney 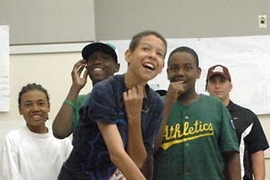 Caption:
Alex Nickerson is at bat as Jordan Smith pitches to him on Briggs Field at MIT. The two middle school students are participating in MIT's summer Science of Baseball program, which, each morning, teaches them things like how a curve ball works and how to calculate player statistics. In the afternoon, they put their new knowledge to work on the field.
Credits:
Photo / Donna Coveney

A program launched at MIT this summer is taking advantage of middle school boys' love of baseball to get them excited about topics that might not normally interest them--science and mathematics.

Students in the program, called "MIT Science of Baseball Program (MSBP)," spend their mornings learning how to calculate baseball statistics and predict the flight path of a home run, among other things. They hit the playing fields after lunch to apply what they've learned in the classroom.

"We realized the potential that baseball has to put students in an educational environment they feel comfortable in," says Dedric Carter, director of the four-week program.

"We've seen in the STEM program that eighth grade is where you start to lose young males," Carter said. "We wanted to see if we could grab them back, and the way to do that is to find something they're passionate about."

Lessons are designed to capture the attention of the program's 23 students. For instance, they learned about the mathematical concept of vectors by calculating the angle at which a ball needs to leave the bat to get out of the park.

On a recent morning, they calculated batting averages, slugging percentages and on-base percentages for several Red Sox players. Their classroom walls are decorated with scale drawings the students have made of major league baseball stadiums and graphs of the boys' heights, weights, and number of steps it takes them to reach first base.

Students are also participating in a fantasy baseball league and have read up on the history of baseball and learned how to score a game.

Karl Reid, director of the Office of Minority Education, came up with the idea for the baseball program after the Red Sox won the World Series in 2004. It seemed like a good time to "leverage the young men's interest in baseball and hopefully translate it into an appreciation of math and science," Reid said.

Jason Larocque, who coordinates the program, played baseball at Harvard and worked for the Red Sox for three years as a scout and bullpen catcher. The teaching and coaching staff also includes two MIT students and one alum of MIT's Saturday Engineering Enrichment and Discovery (SEED) Academy.

The students in the baseball program, most of whom live in Boston and Cambridge, arrived with a wide range of playing ability, and "the best part of the program is that they really support each other," Larocque said.

In the first three weeks of the program, the organizers have already seen evidence of a shift in the boys' attitudes towards math and science, Carter said. He recalled seeing one student light up when discussing correlation, a mathematical topic not easy for eighth graders.

"That made me smile because what we're focusing on here is higher-level thinking skills," Carter said. "If we can get them to see that something they think is really important, like baseball, can fit into things they might not think are important, like math and science, that can make a big difference."

The 484 Phi Alpha Foundation, a group of MIT alumni, is the founding sponsor of the program. Other lead sponsors are the Balfour Foundation and New Balance Foundation, and additional funding was provided by the Red Sox Foundation, Rawlings and MIT.