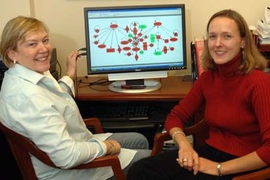 ↓ Download Image
Caption: Leona Samson, left, and Dr. Rebecca Fry have found that prenatal exposure to arsenic leads to alarming changes in the genetics of newborn babies. Samson is the director of MIT's Center for Environmental Health Sciences (CEHS) and the American Cancer Society Professor in the Departments of Biological Engineering and Biology. Fry is assistant scientific director of CEHS.
Credits: Photo / Donna Coveney

Caption:
Leona Samson, left, and Dr. Rebecca Fry have found that prenatal exposure to arsenic leads to alarming changes in the genetics of newborn babies. Samson is the director of MIT's Center for Environmental Health Sciences (CEHS) and the American Cancer Society Professor in the Departments of Biological Engineering and Biology. Fry is assistant scientific director of CEHS.
Credits:
Photo / Donna Coveney

The children of mothers whose water supplies were contaminated with arsenic during their pregnancies harbored gene expression changes that may lead to cancer and other diseases later in life, MIT researchers reported in a new study. In addition to establishing the potential harmful effects of these prenatal exposures, the study also provides a possible method for screening populations to detect signs of arsenic contamination.

This is the first time evidence of such genome-wide changes resulting from prenatal exposure has ever been documented from any environmental contaminant. It suggests that even when water supplies are cleaned up and the children never experience any direct exposure to the pollutant, they may suffer lasting damage.

The research was published in the Nov. 23 issue of PLoS Genetics (published by the Public Library of Science).

The evidence comes from studies of 32 mothers and their children in a province of Thailand that experienced heavy arsenic contamination from tin mining. Similar levels of arsenic are also found in many other regions, including the U.S. southwest.

The research was led by Mathuros Ruchirawat, Director of the Laboratory of Environmental Toxicology of the Chulabhorn Research Institute (CRI) in Thailand, and Leona D. Samson, Director of MIT's Center for Environmental Health Sciences (CEHS) and the American Cancer Society Professor in the Departments of Biological Engineering and Biology at MIT. The first author of the study was Rebecca C. Fry, a research scientist at CEHS. Co-authors included Panida Navasumrit of the CRI and Chandni Valiathan, graduate student at MIT's Computational and Systems Biology Initiative.

The team analyzed blood that had been collected from umbilical cords at birth. The exposure of mothers to arsenic during their pregnancy was independently determined by analyzing toenail clippings--the most reliable way of detecting past arsenic exposure.

The team found a collection of about 450 genes whose expression had been turned on or turned off in babies who had been exposed to arsenic while in the womb. That is, these genes had either become significantly more active (in most cases) or less active than in unexposed babies.

"We were looking to see whether we could have figured out that these babies were exposed in utero" just by using the gene expression screening on the stored blood samples, Samson said. "The answer was a resounding yes."

Further, the team found that a subset of just 11 of these genes could be used as a highly reliable test for determining whether babies had been born to mothers exposed to arsenic during pregnancy. Since blood samples are already taken routinely for medical tests, this may provide an easier way of screening for such exposure.

The gene expression changes the group found in the exposed children are mostly associated with inflammation, which can lead to increased cancer risk. Recognizing the damaging effects of the arsenic exposure, "the government has provided alternative water sources" to the affected villages, Fry said, which means that following these children as they grow older (they are now toddlers) has the potential to show how long-lasting the effects of the prenatal exposure may be. However, she adds, this may be complicated by the fact that many people are still using the local water for cooking.

It's not yet clear how long the changes may last. "We will be testing whether these gene expression changes have persisted in these children," Fry said.

This is the first time such a response to prenatal arsenic exposure has been found in humans. But it is not entirely unexpected, Samson explains, because "in mice, when mothers are transiently exposed to arsenic in the drinking water, their progeny, in their adult life, are much more cancer-prone."

Further research could include studies of possible ways of reversing or mitigating the damage, perhaps through dietary changes, nutritional supplements or drug treatments to counteract the gene expression changes.

Also, the group plans to do follow-up studies in different locations and with larger groups of subjects to confirm the value of the 11 "marker" genes as a reliable indicator of arsenic exposure. The researchers also aim to determine whether the gene expression changes are specific to arsenic.

This study is an example of the CEHS's efforts to promote collaborative interdisciplinary research into global environmental health issues, specifically in the developing world.

This research was funded by the National Institutes of Environmental Health Sciences and the Chulabhorn Research Institute.

A version of this article appeared in MIT Tech Talk on November 28, 2007 (download PDF).