Robotic pets may be bad medicine for melancholy 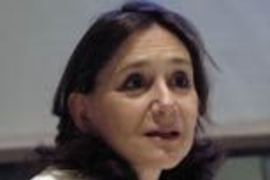 In the face of techno-doomsday punditry, Sherry Turkle has long been a proponent of the positive. In her books, "The Second Self: Computers and the Human Spirit" and "Life on the Screen: Identity in the Age of the Internet," Turkle has explored the relationship between human and machine and found much to ponder and even praise.

But now the director of the MIT Initiative on Technology and Self has a confession: "I have finally met technology that upsets and concerns me."

Turkle, the Abby Rockefeller Mauze Professor of the Social Studies of Science and Technology, outlined her concerns about the implications of increasingly personal interactions between robots and humans during a Nov. 20 lecture on "What Questions do 'Sociable Robots' Pose for STS?," part of the Program in Science, Technology and Society (STS) fall colloquium.

Turkle, a clinical psychologist, spoke earnestly and openly about her fears, acknowledging that some parts of her research "gave me the chills" on a very personal level and that she is "struggling to find an open voice."

A pioneer of the now accepted notion that "technologies are never just tools," Turkle set the stage with a discussion of her work on machines as "evocative objects" and "relational artifacts." She cited quotes from children about how they see robots. For example, she cited a 6-year-old describing his Furby: "It's alive for a Furby. You know something this smart should have arms. It might want to pick up something or to hug me."

From Furbies to robotic dogs like Aibo to pocket "pets" like Tamagotchis to Paro, a robotic baby seal that responds to touch, children and even adults are forming bonds with machines, showing that the killer app may be "nurturing." That is, rather than the computer taking care of us, we take care of the computer, Turkle said.

Increasingly sophisticated robots--with big eyes that follow our faces or which respond to human voice and touch--trigger "Darwinian" responses in us; we are "wired" to react to objects that track our movement, Turkle said.

"This is not about building AI with a lot of smarts," she said. The impact is "not on what it has but how it makes people feel."

One of Turkle's concerns was triggered by the effect of a sophisticated interactive doll, Hasbro's "My Real Baby," and of the Paro seals on the elderly. She left a few "My Real Baby" dolls (which were not a big retail hit with children) in a local nursing home, and when she returned later, she found that the staff had bought 25 of them because of the soothing effect on the residents.

"The only one who's not happy here is the sociologist," said Turkle, raising her hand.

That soothing response was based on a sham, she believes. "What can something that does not have a life cycle know about your death, or about your pain?"

She cited the case of a 72-year-old woman who, because she is sad, says she sees that her robotic toy is also sad. "What are we to make of this relationship when it happened between a depressed woman and a robot?" Turkle asked.

The Q&A period triggered a lively debate over whether such bonding is necessarily bad. A questioner brought up the issue of how the elderly bond to pets. "A dog doesn't talk. A dog doesn't say, 'I love you,' '' Turkle said, although at least one listener insisted his dog does talk, in a fashion.

Turkle isn't sure what a dog can sense. "What I do know is Paro knows nothing. That sense of self soothing was with an object that knows nothing," she stated.

Ultimately, human-like robots will be "test objects by which we are finding out new stuff about ourselves," Turkle said.

A version of this article appeared in MIT Tech Talk on December 6, 2006 (download PDF).