MIT and Portugal to launch major research and education initiative 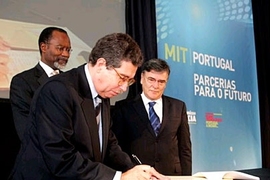 ↓ Download Image
Caption: Jose Mariano Gago, the Portuguese minister of science, technology and higher education, at left, signs a document signalling a collaboration between MIT and many of Portugal's top national universities. At rear, MIT Chancellor Phillip Clay and JoÃ£o Sentieiro, chairman of the board of the MIT-Portugal Program, look on.
Credits: Photo / Ricardo Oliveira - GPM

Caption:
Jose Mariano Gago, the Portuguese minister of science, technology and higher education, at left, signs a document signalling a collaboration between MIT and many of Portugal's top national universities. At rear, MIT Chancellor Phillip Clay and JoÃ£o Sentieiro, chairman of the board of the MIT-Portugal Program, look on.
Credits:
Photo / Ricardo Oliveira - GPM

The Massachusetts Institute of Technology and the Portuguese Ministry of Science, Technology and Higher Education today announced plans to enter into a long-term collaboration to significantly expand research and education in engineering and management across many of Portugal's top national universities.

The wide-ranging initiative will be the broadest of its kind ever undertaken by the government of Portugal and will involve professors, researchers and students from a consortia of schools of engineering, science and technology, economics and management at seven different Portuguese universities, together with a large number of research centers, associated laboratories and state laboratories.

The long-term collaboration was designed based on an assessment study conducted by MIT from February to July 2006 that involved several faculties at MIT and concluded that "â€¦the excellence of the research identified in Portuguese research centers throughout the assessment exercise recommends that MIT foster joint ventures with Portuguese institutions.

"Also, the commitment of the Portuguese government in strengthening science and technology and in promoting international collaborations in higher education and in science and technology is making Portugal an interesting place for doing research and a relevant partner for future joint ventures in the emerging knowledge-based, globalized economy," the report continued.

With participation of more than 40 faculty from all five schools at MIT, the MIT-Portugal Program will undertake research and education in several focus areas.

The educational and research initiatives will give MIT an opportunity to gain insight into the planning, design and implementation of transportation, energy, manufacturing and bioengineering systems in Portugal, all critical sectors of the global economy. Faculty will be encouraged to make new educational material publicly available through MIT OpenCourseWare.

The MIT-Portugal Program is part of a major initiative undertaken by the Portuguese government to strengthen the country's knowledge base at an international level through a strategic investment in people, knowledge and ideas.

The program was announced today at a public session headed by Portuguese Prime Minister JosÃ© SÃ³crates and attended by senior MIT administrators and leaders from Portuguese institutions involved in the collaboration.

"The Portuguese government launched a technological plan as a political idea to mobilize the state, business and citizens around critical drivers of modernization: knowledge, technology and innovation. The duty of a responsible government with a look towards the future is undoubtedly to foster scientific and technological skills and to recognize the essential role of research and development activities," said SÃ³crates.

The leading role of this long-term collaboration has also been emphasized by Jose Mariano Gago, the Portuguese minister of science, technology and higher education, for whom "the Portugal-MIT Program will bring new blood and will provide new challenges to the very fast and impressive growth of Portuguese science and technology."

Portuguese Secretary of State Manuel Heitor also noted that "the MIT-Portugal Program will promote a new research and education agenda on engineering systems, involving consortia of Portuguese universities and giving emphasis to large-scale systems that not only have critical technological components, but also have significant enterprise and socio-technical level interactions, in a way that will promote new engineering research in Europe."

MIT's Engineering Systems Division (ESD), an interdisciplinary unit at MIT with faculty from engineering, management and the social sciences, which provides an integrative perspective to large-scale complex systems that have a major societal and economic impact, will coordinate the engineering aspect of the MIT-Portugal Program. The program will be of enormous benefit to ESD as it works with Portugal to develop engineering systems as a new field of study that will have major social and economic impact in the 21st century.

"The creation of the MIT-Portugal Program expands upon successful faculty collaborations already in place, and will bring new academic and research insights in areas where large-scale complex systems are fundamental to every institution involved. This relationship is an exciting step in allowing both parties to collaborate on scientific and technological discoveries that are critical to the future of Portugal, of importance to MIT, and will impact Europe to the north and the Mediterranean to the south," said Tom Magnanti, Dean of MIT's School of Engineering.

Each of the thematic focus areas in manufacturing, transportation, energy and bio-engineering will involve a new companion effort, "MIT-Portugal Industrial affiliates," with the goal of fostering new research consortia in collaboration with MIT, leading to new frontiers of transatlantic collaboration in science and technology. Manufacturing will launch the first affiliates program with a set of leading companies in the automotive sector, including VW AutoEuropa, the largest car assembler in Portugal and major auto parts manufacturers.

The MIT-Portugal Program also has an engineering systems component that integrates the focus areas and develops fundamental concepts of engineering systems. Portugal and MIT ESD will work together to broaden engineering education and practice and to create a new field of study and research in engineering. A new research area will be created within the Portuguese Science and Technology Foundation to facilitate achieving these purposes. An important focus of this work will be to examine how universities, industry and government can work together to utilize the results of the MIT-Portugal Program, both in Portugal and at MIT.

The MIT-Portugal Program in the area of engineering systems will be led by Professor Daniel Roos, founding director of MIT's ESD, and Professor Paulo Manuel Cadete FerrÃ£o, director of the Center For Innovation, Technology and Policy Research at Instituto Superior TÃ©cnico, the Technical University of Lisbon.

In an effort to determine the extent of the collaboration and program content of the management segment of the MIT-Portugal Program, MIT's Sloan School of Management faculty will collaborate with faculty from Portuguese universities for a nine-month exploration of program development.

Initial discussions will focus on the design of a Global M.B.A. Program with leading business schools in Portugal; the development of a mid-career program in entrepreneurship, bringing together leading business and engineering schools; and the launching of a program of seminars in the form of a "Lisbon-Sloan Seminar Series in Management Science." It will involve the Portuguese Catholic University, the School of Economics and Management at the Universidade Nova de Lisboa, the ISCTE Business School, and the School of Economics and Management at the Technical University of Lisbon.