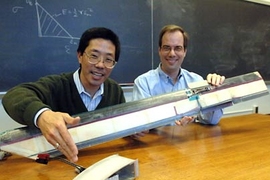 Picture a bird, effortlessly adjusting its wings to catch every current of air. Airplanes that could do the same would have many advantages over today's flying machines, including increased fuel efficiency.

Now MIT engineers report they may have found a way for structures -- and materials -- to move in this way, essentially morphing from one shape into another.

The discovery could lead to an airplane that morphs on demand from the shape that is most energy efficient to another better suited to agility, or to a boat whose hull changes shape to allow more efficient movement in choppy, calm or shallow waters.

This science-fiction outcome, in the works for 20 years, has been unobtainable with such conventional devices as hydraulics, which aren't practical for a variety of reasons -- from cost to weight to ease of movement.

Batteries expand and contract as they are charged and recharged. "This has generally been thought to be something detrimental to batteries. But I thought we could use this behavior to another end: the actuation, or movement, of large-scale structures," said Yet-Ming Chiang, the Kyocera Professor in the Department of Materials Science and Engineering (MSE).

Several types of "active" materials are already used to move devices ranging from miniature motors to micropositioners. None, however, "can enable the large-scale structural morphing we've been working toward," Hall said.

For example, some "smart materials" called piezoelectrics can change shape in less than the blink of an eye, but they do so on almost a microscopic level. They wouldn't be capable of moving a wing the distance necessary to affect flight.

Similarly, shape-memory alloys have characteristics useful to large-scale actuation, but they require temperature control to work. "So to make them work you've got to keep them warm and insulate them. And if you insulate them, it takes a long time to cool them down if you want them to return to their original shape," Hall said. Those are not exactly optimum conditions for seamless morphing.

In the quest for materials that would allow such morphing, engineers have recently focused on nature's approach to the problem. A plant that bends toward the light, quickly furls its leaves when touched, or pushes a concrete sidewalk aloft with its roots is essentially moving fluids between cells.

Chiang realized that the solid compounds used to store electrical energy in lithium rechargeable batteries could be made to work in a similar way. The movement of ions to and from these materials during charging and recharging, he thought, was analogous to the moving fluids in plants. Could this be a synthetic counterpart to nature's solution?

To find out, Chiang and Hall began testing commercially available rechargeable batteries of a prismatic form, then designed their own devices composed of graphite posts surrounded by a lithium source. The results were promising.

Among other things, they found that the batteries continued to expand and contract under tremendous stresses, a must for devices that will be changing the shape of, say, a stiff helicopter rotor that's also exposed to aerodynamic forces.

Other key advantages of the approach: The electrically activated batteries can operate at low voltages (less than five volts) as compared to the hundreds of volts required by piezoelectrics. The materials that make up the batteries are also inherently light. "For things that fly, weight is important," Hall said.

The researchers have already demonstrated basic battery-based actuators that can pull and push with large force. Later this year, they hope to demonstrate the shape-morphing of a helicopter rotor blade. The morphing capability should allow for a more efficient design, ultimately making it possible for a vehicle to carry heavier loads. Team members say that other applications, including miniaturized devices for Micro-Electrical-Mechanical Systems (MEMS), may flow from these initial demonstrations.

The researchers emphasize that much work remains to be done, such as refining the design of the battery for optimal operation in a morphing vehicle. Chiang notes, however, that "we've been able to demonstrate the potential of this approach even using these very unoptimized off-the-shelf batteries."

This work was funded by the Defense Advanced Research Projects Agency (DARPA).

A version of this article appeared in MIT Tech Talk on March 22, 2006 (download PDF).