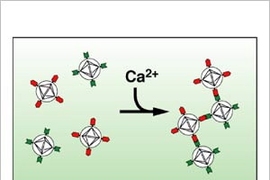 If you want to see precisely what the 100 billion neurons in a person's brain are doing, a good way to start is to track calcium as it flows into neurons when they fire.

To that end, Alan Jasanoff at the McGovern Institute for Brain Research at MIT has developed a new nano-sized calcium-sensing contrast agent that is detectable by magnetic resonance imaging (MRI) scanners, machines that can be used for detailed noninvasive brain imaging.

The work is reported in the early online edition of the Proceedings of the National Academy of Sciences the week of Sept. 25-29.

In an application known as functional MRI (fMRI), MRI machines are already increasingly used to observe brain functions as people--or animals--undertake various activities like reading or learning. But Jasanoff notes that current fMRI technology has limitations.

"Using conventional fMRI to study the brain is like trying to understand how a computer works by feeling which parts of it are hot because of energy dissipation in different components," said Jasanoff, who also holds appointments as an assistant professor in MIT's Department of Nuclear Science and Engineering, Department of Brain and Cognitive Sciences, and Biological Engineering Division.

The analogy is apt, because fMRI indirectly measures neural activity by detecting changes in blood flow to brain regions with increased energy requirements. But these hemodynamic changes occur several seconds after the neurons actually fire, too slow to study precise neural activity. Further, the spacing of tiny blood vessels limits the spatial resolution of the technique to volumes containing at least 1,000 neurons, too coarse for discrimination of highly specialized functional areas within a brain region.

Calcium, however, provides a direct measure of neural activity because calcium almost instantly enters neurons when they fire, and the faster the rate of firing, the higher the calcium level. Thus, tracking calcium levels in the brain actually follows information flow through the brain's circuitry.

MRI detects changes in magnetic properties, so to be visible to MRI, a calcium contrast agent must include a magnetically active "paramagnetic" component.

Jasanoff's sensor is actually made from two similar types of superparamagnetic nanoparticles that stick to each other like Velcro-coated balls when calcium levels rise. This aggregation is reversible, which allows the sensor to indicate the temporal dynamics of calcium-related neural activity, such as the sequence in which populations of cells become active, or the synchronization of neurons during certain behaviors.

Graduate student Tatjana Atanasijevic of nuclear science and engineering, the lead author of the paper, is working on methods to apply the calcium sensor in living brain cells.

The contrast sensors Jasanoff is developing "will be tools for making the shift from imaging gross functional properties of the brain through its hemodynamic changes to a fine-tuned analysis based on information flow involving cells and circuits," he said. "There are many potential applications for studying learning, memory and behavior, and we need the new tools to get to the applications."

This research is supported by the Raymond & Beverly Sackler Foundation, the National Institute of Biomedical Imaging and Bioengineering and a McKnight Foundation Technological Innovations in Neuroscience award.

A version of this article appeared in MIT Tech Talk on October 4, 2006 (download PDF).