DUSP prof makes a BID for the French Quarter 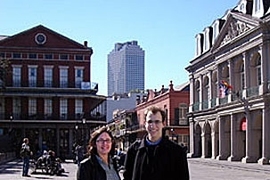 Lorlene Hoyt has still not made up her mind about downtown management organizations.

An assistant professor in urban studies and planning, Hoyt spent much of her career studying these controversial entities. She knows them well enough to call them by nickname--"BIDs," for "business improvement districts." Still, she says, "It's tough for me to say fundamentally whether they're good or bad. That's what's so fascinating about the New Orleans project."

She's referring to this semester's class project: Her students are creating a plan for a BID for the French Quarter in New Orleans, to be presented Dec. 15.

The idea is that the French Quarter is the greatest economic asset of the storm-ravaged city and the best place for investment that will generate growth and renewal that will spill over to the surrounding area.

Of her students in Course 11.422 (Downtown Management Organizations), she says, "We're looking to extract lessons learned and apply them in an effort to jump-start the French Quarter."

BIDs are separate units of governance layered over a municipal or other local government. A BID is set up with defined geographic limits and taxing authority within those limits. As the name suggests, business interests are often the driving force within a BID. Its goals are typically to provide enhanced public services such as security and sanitation to make an area safer for tourists, shoppers, employers and others.

BIDs have been instrumental to the revitalization of big cities, notably New York. But they have also drawn fire for privatizing security in public spaces and for helping city halls escape accountability for delivery of public services.

Hoyt acknowledges that in an ideal world, service delivery wouldn't even be an issue. But she says pragmatically, "This is where we are." At their best, she says, BIDs can help "raise the bar" for official accountability. Hoyt notes that in South Africa, BIDs enter into performance agreements with municipal governments to ensure adequate police patrols, for instance.

And service to private interests isn't necessarily at the expense of public interests, she suggests. "If there's a private security patrol that makes me feel safer as a pedestrian tourist in Capetown, that's a good thing."

And although BIDs may function largely as cheerleaders and focus largely on perceptions, she adds, "they're removing real trash and real crime from the streets."

For the New Orleans project, Hoyt's students, along with those in Professor Karl Seidman's Course 11.437 (Financing Economic Development), have been working with Virginia Boulet, chair of the Retail Development Task Force appointed by New Orleans Mayor Ray Nagin.

They have traveled to New Orleans to meet with all stakeholders in the French Quarter. "They've got a lot of divergent perspectives," Hoyt says with a chuckle that suggests diplomatic understatement.

The good news is that however divergent the views, everyone understands that New Orleans' infrastructure is in bad shape and that the city needs help with things like public safety and code enforcement. "And they know they aren't going to get it from general revenues," Hoyt says.

At the beginning of the course, Hoyt's students had to digest a lot of "heavy academic readings," she says. Now theory is being put into practice.

"Now they're grappling with a really tough situation. I love it that way. It makes the work I do a bridge between theory and practice," she says.