MIT gears up for 140th Commencement 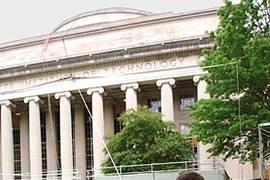 ↓ Download Image
Caption: Gary Cunha of facilities, right, gets some help from John Grenier of Atlantic Plant Maintenance on Friday, June 2, to haul up the sail that will shade the stage during Commencement on Friday, June 9.
Credits: Photo / Donna Coveney

Caption:
Gary Cunha of facilities, right, gets some help from John Grenier of Atlantic Plant Maintenance on Friday, June 2, to haul up the sail that will shade the stage during Commencement on Friday, June 9.
Credits:
Photo / Donna Coveney

Macroeconomist Ben S. Bernanke, chair of the Federal Reserve and an MIT alumnus (Ph.D. 1979), will deliver the principal address at MIT's 140th Commencement exercises, to be held Friday, June 9, at 10 a.m. in Killian Court.

During the ceremony, 2,109 undergraduates and graduate students are scheduled to receive 1,036 bachelor's degrees, 1,048 master's degrees, 270 doctorates and nine engineer degrees.

"Bernanke's presence at the podium will have a special resonance given MIT's role as a wellspring of innovation in today's knowledge-based economy. His career has exemplified values that are central to MIT -- personal integrity, analytical rigor, an uncompromising drive toward excellence and a commitment to public service -- and I can think of no one who can better inspire our new graduates to use their talents to serve the nation and the world," said President Susan Hockfield.

A former chair of the President's Council of Advisors and a member of the Fed's Board of Governors since 2002, Bernanke was appointed by President Bush and approved by the U.S. Senate to assume leadership of the Federal Reserve on Feb. 1, 2006. The head of the Fed sometimes known as the nation's "banker in chief" -- is widely considered to be the world's most powerful economist.

Hockfield will deliver the traditional charge to the graduates. Other Commencement speakers will include Emilie Slaby, president of the Graduate Student Council, and Kimberley Wu, president of the Class of 2006.

Provost L. Rafael Reif will award advanced degrees in the Schools of Architecture and Planning; Engineering; Humanities, Arts and Social Sciences; and in the MIT Sloan School of Management.

Admission for ticketed guests begins at 7:30 a.m. Graduates will robe and assemble on the first floor of Johnson Athletic Center, beginning at 7:30 a.m. Between 8 a.m. and the beginning of the academic procession, families and guests may enjoy a live view of the graduates robing and assembling via television feed to Killian Court.

Following the exercises, a reception will be held for graduates and their guests on the West Campus Plaza.

Commencement exercises require complex and precise planning and the coming and goings of guests must be free of obstruction or interference.

In accordance with this policy, Killian Court will only be accessible to members of the graduating class, faculty, stage assembly and ticket-holders. Access to Johnson Athletics Center will also be limited. In both Killian Court and Johnson, everyone will be electronically scanned as they enter.

For more specific details, please see the Statement by the Chancellor's Committee on Protocol for Demonstrations at Commencement and other Academic Exercises. Questions regarding locations for demonstrations may be directed to Gayle Gallagher, executive officer for Commencement at gayle@mit.edu.

For those unable to get into Killian Court, a live online webcast of the Commencement exercises will be available on and after June 9.

For guests attending the Commencement exercises on Friday, complimentary parking will be available in the West Parking Garage on Vassar Street.

In the event the Commencement exercises in Killian Court are canceled due to severe weather conditions, the speeches will be held in Rockwell Cage for the stage assembly and graduates only. Guests may view the speeches on closed-circuit television in viewing locations throughout the campus.

A version of this article appeared in MIT Tech Talk on June 7, 2006 (download PDF).