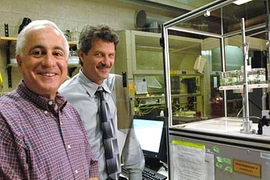 ↓ Download Image
Caption: Professors Robert Cohen and Michael Rubner pose in Rubner's lab with equipment they use to try to mimic the watermaking abilities of the Namib Desert beetle.
Credits: Photo / Donna Coveney 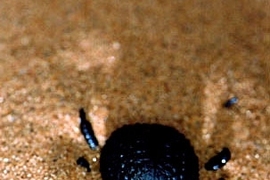 Caption:
Professors Robert Cohen and Michael Rubner pose in Rubner's lab with equipment they use to try to mimic the watermaking abilities of the Namib Desert beetle.
Credits:
Photo / Donna Coveney

The Namib Desert, one of the driest regions in the world, gets less than half an inch of rain per year. But early in the morning, a light fog drifts over the desert, offering the plants and animals living in that harsh environment their only chance for a life-sustaining drink.

When that fog rolls in, the Namib Desert beetle is ready with a moisture-collection system exquisitely adapted to its desert habitat. Inspired by this dime-sized beetle, MIT researchers have produced a new material that can capture and control tiny amounts of water.

The material combines a superhydrophobic (water-repelling) surface with superhydrophilic (water-attracting) bumps that trap water droplets and control water flow. The work was published in the online version of Nano Letters on Tuesday, May 2.

Potential applications for the new material include harvesting water, making a lab on a chip (for diagnostics and DNA screening) and creating microfluidic devices and cooling devices, according to lead researchers Robert Cohen, the St. Laurent Professor of Chemical Engineering, and Michael Rubner, the TDK Professor of Polymer Materials Science and Engineering.

The U.S. military has also expressed interest in using the material as a self-decontaminating surface that could channel and collect harmful substances.

The researchers got their inspiration after reading a 2001 article in Nature describing the Namib Desert beetle's moisture-collection strategy. Scientists had already learned to copy the water-repellent lotus leaf, and the desert beetle shell seemed like another good candidate for "bio-mimicry."

"If you sat at your desk and tried to just think of ways to do things, it would take a very long time," Cohen said. "Once you see these things in action, it's obvious what you have to do."

The desert beetle has evolved to take perfect advantage of the tiny amount of water available in the desert. The fog that drifts over the Namib Desert is so light that normal condensation can't take place, so "you need something specially designed to hold and collect that condensation," Rubner said.

When fog blows horizontally across the surface of the beetle's back, tiny water droplets, 15 to 20 microns, or millionths of a meter, in diameter, start to accumulate on top of bumps on its back.

The bumps, which attract water, are surrounded by waxy water-repelling channels. "That allows small amounts of moisture in the air to start to collect on the tops of the hydrophilic bumps, and it grows into bigger and bigger droplets," Rubner said. "When it gets large, it overcomes the pinning force that holds it and rolls down into the beetle's mouth for a fresh drink of water."

To create a material with the same abilities, the researchers manipulated two characteristics -- roughness and nanoporosity (spongelike capability on a nanometer, or billionths of a meter, scale).

By repeatedly dipping glass or plastic substrates into solutions of charged polymer chains dissolved in water, the researchers can control the surface texture of the material. Each time the substrate is dipped into solution, another layer of charged polymer coats the surface, adding texture and making the material more porous. Silica nanoparticles are then added to create an even rougher texture that helps trap water droplets.

The material is then coated with a Teflon-like substance, making it superhydrophobic. Once that water-repellent layer is laid down, layers of charged polymers and nanoparticles can be added in certain areas, using a properly formulated water/alcohol solvent mixture, thereby creating a superhydrophilic pattern. The researchers can manipulate the technique to create any kind of pattern they want.

"I think this is the factory of the future, or the chemical plant of the future," Cohen said. "I think there could be a lot of (applications) we haven't even thought of yet that might come out of this."

The research is funded by the Defense Advanced Research Projects Agency and the National Science Foundation.

A version of this article appeared in MIT Tech Talk on June 14, 2006 (download PDF).