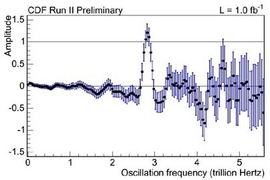 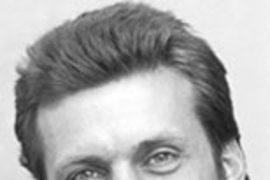 Caption:
Figure shows the CDF measurement of the Bs oscillation frequency at 2.8 trillion times per second.

It's taken 19 long years of painstaking, high-precision experiments, but it's finally official: Physicists have announced the observation of a subatomic particle known as the Bs (pronounced "B sub s") meson switching between matter and antimatter states at a mind-boggling 3 trillion times per second.

The work could lead to a better understanding of the early universe, in which these particles were present in great abundance. It will also help physicists refine different theoretical models in high-energy physics.

Christoph Paus, associate professor of physics at MIT, led the analysis of years' worth of data from the world's highest-energy particle accelerator. Representing the 700-member team of the Collider Detector at Fermilab (CDF) collaboration, Paus presented the discovery to the scientific community Sept. 22 at the Fermi National Accelerator Laboratory in Illinois.

"The CDF result is an exquisite example of precision measurements extracting a small and subtle effect from nature," said Richard G. Milner, professor of physics and director of MIT's Laboratory for Nuclear Science (LNS). "The MIT group under the leadership of Christoph Paus, and with the strong support of the U.S. Department of Energy Office of High Energy Physics, the MIT Department of Physics and the MIT School of Science, constructed a key detector that was essential to this measurement."

Like Jekyll and Hyde, some subatomic particles are able to act as both matter and their antimatter counterparts. Often referred to as mixing or oscillation, this process has been known to quantum physicists for 50 years. The CDF team looked at one of those particles, the Bs meson, which is composed of other subatomic particles: a heavy "bottom quark" bound to a "strange anti-quark."

Earlier this year, the CDF collaboration announced the first evidence of the oscillation process. "But only now the probability for a fluke (a signature caused by a random fluctuation) has been reduced to the commonly accepted standard to call it an observation," Paus said. To avoid false observations, particle physicists require this probability to be smaller than 5 in 10 million. For the CDF result the false observation probability is only 8 in 100 million.

Scientists hope that by assembling a large number of precise measurements involving the exotic behavior of these particles, they can begin to understand why they exist, how they interact with one another and what role they played in the development of the early universe. The researchers' goals are to discover the identity and properties of the particles and to understand the forces and interactions between them. None of these particles exist in nature today. They are created in particle collisions at large particle accelerators, where scientists can study them by analyzing the ghosts of the trails they leave in the detectors.

"The rapid matter-antimatter oscillations, 3 trillion times per second, give us a glimpse at the development of the early universe and might help us understand why there is so little antimatter in it right now," Paus said.

The CDF physicists come from 61 institutions and 13 countries. Paus, a member of the LNS, led the data analysis effort involving 80 scientists from 27 institutions. "Scientists have been pursuing this measurement for two decades, but the convergence of capabilities to make it possible has occurred just now," said CDF co-spokesperson Jacobo Konigsberg.

Physicists will now have to check many theoretical models of how the universe works at a fundamental level to see if they comply with the CDF discovery. The 25-year-old Standard Model of particle physics predicted the bizarre behavior of the Bs meson, and the discovery reinforces its validity. The discovery also narrows down the possible forms of supersymmetry, a theory proposing that each known particle has its own more massive "super" partner particle. Some currently popular models of supersymmetry predict a much higher transition frequency than that observed by the CDF collaboration, and those models will need to be refined.

"This measurement is not the end of the story. It opens new venues to pursue the quest for nature's best-kept secrets," Paus said.

"I am very proud that the MIT group played such a crucial role in this, one of the most important tests of the Standard Model of particle physics in many years," said Marc A. Kastner, head of the MIT Department of Physics and the Donner Professor of Science.

The results reported at Fermilab set important vectors for new research at the Large Hadron Collider at CERN in Geneva, Switzerland, which is expected to be turned on within 18 months, Milner said.

"We are all excited by this great result in which Christoph Paus and his group from our physics department played such a crucial role," said Robert Silbey, dean of the MIT School of Science. "Now on to the LHC at CERN!"

Fermilab is a Department of Energy Office of Science national laboratory. CDF is supported by the DOE, the NSF and international funding agencies.