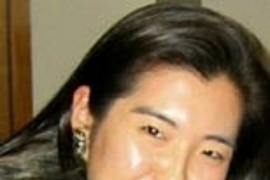 For Laurel Yong-Hwa Lee, the awards just keep rolling in.

Lee is one of 20 students named to the All-USA College Academic Team, an award given each year by the editors of USA Today, the nation's top-selling newspaper with an average daily circulation of 2.3 million. She was selected by a panel of judges from more than 600 students nominated by colleges and universities across the United States. She is recognized for her outstanding intellectual achievement and leadership. The award includes $2,500 in cash.

Lee also received one of the top academic awards last fall when she won a Rhodes Scholarship, which she will use to pursue a doctorate in clinical medicine at Oxford University.

A few months earlier, she was profiled in Glamour magazine's Top 10 College Women list. She and fellow senior Swati Maria Saini were recognized for their leadership, community and academic achievements, and were featured in the magazine's October 2004 issue. And in February 2004, Lee was named a Burchard Scholar in the School of Humanities, Arts and Social Sciences at MIT, an honor given to students who demonstrate unusual abilities and academic excellence.

The senior from Bothell, Wash., is both an academic superstar and a passionate young woman aiming to change the world with her work. While all four of the awards recognize her scholastic achievement, the two given by media also recognize her leadership and the well-rounded nature of her accomplishments. In addition to her scholarship, she has done volunteer work in Honduras, rows with the MIT crew team, and is an accomplished violinist.

Lee came to the U.S. at age 16 from Korea. Now a pre-med double-major in brain and cognitive sciences and biology, she plans to pursue her Ph.D. in infectious diseases and tropical medicine at Oxford, having already lined up a mentorship with the head of the Medical Research Council in England. Her interest in infectious diseases stems from her experience working as a medical coordinator for a foundation supporting abandoned women and children and a hospital emergency room in Honduras.

"While building strong relationships with single mothers in shelters and children in orphanages, and developing a deeper appreciation of the public health care system in Honduras, I developed a sense of responsibility for addressing the challenges I witnessed-- specifically in the areas of infectious diseases," Lee said.

"I decided to pursue a medical path to integrate my training in basic science with the study of infectious diseases that continue to be constant threats to the lives of people I met in Honduras, as well as people throughout the rest of the world," said Lee.

Lee's nomination for the USA Today award focused on her academic research, achievements and honors, but included an emphasis on her community and personal interests as well. She has devoted a significant amount of her time at MIT not only to her dual major, but to the varsity lightweight crew team.

"My training as a varsity rower during the past three and a half years has invigorated my body and mind," said Lee. She plans to continue rowing at Oxford.

Also a nationally recognized violinist with more than 15 years of training, Lee has maintained a persistent passion for music. She began playing the violin at age six, and once considered a career in music.

She now considers music a complement to her scientific ambitions, and lights up when she talks about her music analysis work with Professor Lowell Lindgren, a renowned musicologist in MIT's Music and Theater Arts Section.

She found that MIT's culture allows her to pursue both music and science and enjoy her rowing, activities that helped her become an All-USA collegian.