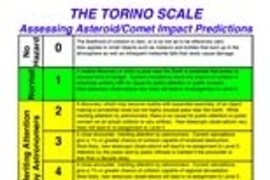 Astronomers led by an MIT professor have revised the scale used to assess the threat of asteroids and comets colliding with Earth to better communicate those risks with the public.

The overall goal is to provide easy-to-understand information to assuage concerns about a potential doomsday collision with our planet.

The Torino scale, a risk-assessment system similar to the Richter scale used for earthquakes, was adopted by a working group of the International Astronomical Union (IAU) in 1999 at a meeting in Torino, Italy. On the scale, zero means virtually no chance of collision, while 10 means certain global catastrophe.

"The idea was to create a simple system conveying clear, consistent information about near-Earth objects [NEOs]," or asteroids and comets that appear to be heading toward the planet, said Richard Binzel, a professor in MIT's Department of Earth, Atmospheric and Planetary Sciences and the creator of the scale.

Some critics, however, said that the original Torino scale was actually scaring people, "the opposite of what was intended," said Binzel. Hence the revisions.

"For a newly discovered NEO, the revised scale still ranks the impact hazard from 0 to 10, and the calculations that determine the hazard level are still exactly the same," Binzel said. The difference is that the wording for each category now better describes the attention or response merited for each.

For example, in the original scale NEOs of level 2-4 were described as "meriting concern." The revised scale describes objects with those rankings as "meriting attention by astronomers"--not necessarily the public.

Equally important in the revisions, says Binzel, "is the emphasis on how continued tracking of an object is almost always likely to reduce the hazard level to 0, once sufficient data are obtained." The general process of classifying NEO hazards is roughly analogous to hurricane forecasting. Predictions of a storm's path are updated as more and more tracking data are collected.

According to Dr. Donald K. Yeomans, manager of NASA's Near Earth Object Program Office, "The revisions in the Torino Scale should go a long way toward assuring the public that while we cannot always immediately rule out Earth impacts for recently discovered near-Earth objects, additional observations will almost certainly allow us to do so."

The highest Torino level ever given an asteroid was a 4 last December, with a 2 percent chance of hitting Earth in 2029. And after extended tracking of the asteroid's orbit, it was reclassified to level 1, effectively removing any chance of collision, "the outcome emphasized by level 4 as being most likely," Binzel said.

"It is just a matter of the scale becoming more well known and understood. Just as there is little or no reason for public concern over a magnitude 3 earthquake, there is little cause for public attention for NEO close encounters having low values on the Torino scale." He notes that an object must reach level 8 on the scale before there is a certainty of an impact capable of causing even localized destruction.

The Torino scale was developed because astronomers are spotting more and more NEOs through projects like the Lincoln Near Earth Asteroid Research project at MIT's Lincoln Laboratory. "There's no increase in the number of asteroids out there or how frequently they encounter our planet. What's changed is our awareness of them," Binzel notes.

As a result, astronomers debated whether they should keep potential NEO collisions secret or "be completely open with what we know when we know it," Binzel said. The IAU working group, of which Binzel is secretary, resoundingly decided on the latter.

The revised wording of the scale was published last fall in a chapter of "Mitigation of Hazardous Comets and Asteroids" (Cambridge University Press). The revisions were undertaken through consultation with astronomers worldwide for nearly a year before being published.

Binzel concludes that "the chance of something hitting the Earth and having a major impact is very unlikely. But although unlikely, it is still not impossible. The only way to be certain of no asteroid impacts in the forecast is to keep looking."

For more information on the revised Torino scale go to: neo.jpl.nasa.gov/torino_scale.html.

A version of this article appeared in MIT Tech Talk on April 13, 2005 (download PDF).