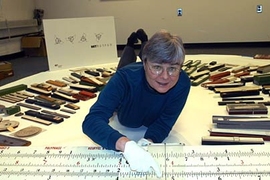 ↓ Download Image
Caption: Deborah Douglas, curator of science and technology for the MIT Museum, sprawls among some of the 600 historic slide rules that were recently donated to the museum.
Credits: Photo / Donna Coveney

Caption:
Deborah Douglas, curator of science and technology for the MIT Museum, sprawls among some of the 600 historic slide rules that were recently donated to the museum.
Credits:
Photo / Donna Coveney

The MIT Museum now has more than 600 historic slide rules in its permanent collection. After several months of negotiations, InteliCoat Technologies of South Hadley, Mass., selected the museum to be the permanent repository of the Keuffel and Esser Company Slide Rule Collection. The collection represents a major resource for scholars and collectors.

Through a series of mergers, InteliCoat, which manufactures coated papers, films and specialty substrates, acquired the remaining assets -- including the slide rule collection -- of Keuffel & Esser of Hoboken, N.J., the most significant manufacturer of slide rules in the U.S. InteliCoat executives Robert Champigny and Charles E. Quinby decided to find an appropriate home for the collection, and chose the MIT Museum.

"We feel there's no better place than MIT, one of the world's premier engineering schools, for this historic collection," said Quinby, director of quality, commercialization and technical support. "And we are very excited that it will be preserved and accessible. Visitors, especially younger people such as my children, will learn to appreciate the slide rule's role in shaping our world."

"It is a privilege to serve as the first steward of this collection," says Deborah Douglas, the museum's curator of science and technology. "It has a strong emotional appeal to the MIT community, but to be provocative, one could argue that the slide rule is the most important technology of the 20th century that historians have not studied."