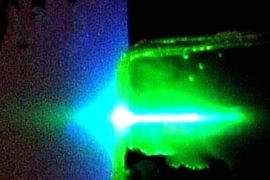 ↓ Download Image
Caption: A sensor film made of a novel semiconducting organic polymer undergoes a lasing process when exposed to ultraviolet light. When TNT is present, it binds to the polymer and quenches the beam.

Caption:
A sensor film made of a novel semiconducting organic polymer undergoes a lasing process when exposed to ultraviolet light. When TNT is present, it binds to the polymer and quenches the beam.

MIT researchers have announced a scientific breakthrough that could greatly improve explosives detection for military and civilian security applications.

Scientists have developed a new polymer that greatly increases the sensitivity of chemical detection systems for explosives such as trinitrotoluene (TNT). In the April 14 issue of Nature, scientists describe a polymer that undergoes lasing action at lower operating powers than previously observed, and they demonstrate that the stimulated light emission from the lasing modes of the polymer displays inherently greater sensitivity to explosives vapors.

"What we have done is add another layer of amplification to the most sensitive TNT sensor available," said Professor Vladimir Bulovic.

Bulovic (electrical engineering and computer science) and Professor Tim Swager (chemistry) led the team that designed the novel semiconducting organic polymer (SOP) and invented the new chemosensing method. When exposed to ultraviolet light above a threshold intensity, the material undergoes a stimulated emission or a lasing process, manifested by a directed beam of light emanating from the thin SOP film. When TNT is present, it binds to the SOP surface and quenches the beam.

Because the new polymer undergoes stimulated emission at lower thresholds than earlier SOP materials, the intensity of the ultraviolet light needed to start the lasing action (pump power) is reduced by more than tenfold. This lowers the optical damage usually caused to organic molecules under intense illumination in air. By adjusting the pump power to just over the threshold needed for lasing, it is possible to dramatically attenuate the lasing emission with parts-per-billion doses of TNT vapor. The result is a thirtyfold increase in the detection sensitivity when the system is operating near the lasing threshold.

"This amplification method is extremely general," said Swager, who has previously developed a range of polymeric explosives detection systems. "I predict there will be many new fluorescent sensory schemes based on this principle."

Swager and Bulovic's invention is part of a larger program in sensing technology at MIT's Institute for Soldier Nanotechnologies (ISN), a research center devoted to improving soldier survivability through nanotechnology. New technologies for explosives sensing could help protect soldiers from improvised explosive devices, one of the greatest threats facing coalition forces in Iraq. Enhancing the sensitivity of these detection systems could increase the distance at which explosives can be identified.

Swager's previous work in explosives detection systems has been licensed from MIT and commercialized by Nomadics Inc., an Oklahoma-based company working with the ISN. Their Fido explosives detection system, which rivals the detection ability of a trained dog, is currently undergoing tests by the U.S. Army and Marine Corps in Iraq and by the U.S. Air Force for cargo screening operations.

"The ISN has been very helpful in bringing this technology to the attention of senior leaders of the Army and Marine Corps," said Dr. Larry Hancock from Nomadics. "We are very excited by the successes we have had in field demonstrations and we are working hard with the Army, Marine Corps and Air Force to meet their operational needs."

According to Bulovic, the present innovation can greatly increase the sensitivity of the Fido device.

Dr. Aimee Rose, a member of the team who made the discovery, predicts it will save many lives, both military and civilian. "To turn a laboratory discovery into a potentially lifesaving device has been an extremely gratifying experience," she said. "As a scientist, that is about as good as it gets."

A version of this article appeared in MIT Tech Talk on May 4, 2005 (download PDF).