Tropical seesaw: A flooded Amazon means drought in the Congo 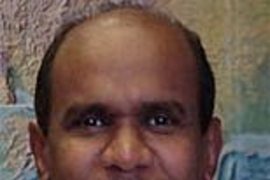 When the Pacific talks, the global climate listens in the phenomenon known as the El Nino southern oscillation that receives ample scrutiny by researchers and rapt attention from the public. Now MIT scientists have learned that a similar climatic conversation occurs between the world's two largest tropical river basins: the Amazon in South America and the Congo in Africa.

When the Amazon river basin floods, the Congo basin dries up, and vice versa. MIT Professor of Civil and Environmental Engineering Elfatih A. B. Eltahir calls this previously undocumented pattern a seesaw oscillation. He and his research team described their discovery in the December 2004 issue of Geophysical Research Letters.

"It's important, because it tells us about a phenomenon involving the two largest rivers and their natural variability," Eltahir said. "The possible implications are that we could identify precursors of climate conditions that would improve the predictability of floods and droughts in the tropics." The study has social as well as scientific relevance, since the ups and downs of rainfall in these regions can mean feast or famine for the inhabitants.

Eltahir specializes in hydroclimatology, the two-way street connecting events in the water cycle, such as evaporation and the convection of moist air, with climate conditions, such as rainfall systems. As he explains, the world has three main rainfall centers where intense storms with a global reach originate: the Western Pacific Ocean, the Amazon River basin and the Congo River basin. The two land-based rainfall centers also host the world's first and second largest rivers, respectively.

In spite of this important status among rainfall centers, scientists had collected little data on actual rainfall patterns in the Amazon and Congo, partially because of the areas' remoteness. Then in 1997, NASA started the Tropical Rainfall Measuring Mission to collect satellite data over the tropics, but no one had analyzed the data for the Amazon and Congo basins.

Eltahir asked undergraduate Teresa K. Yamana to look at the data for those basins for the years 1998 to 2002. In the resulting graph, the lines for the two regions formed mirror images--high rainfall for the Amazon/low rainfall for the Congo--that looked like a seesaw. The observation held true when put to additional scientific and statistical scrutiny by Eltahir.

To find out if the pattern also occurred over the long term, Eltahir asked graduate student Brian Loux (an undergraduate at the time) to analyze older data of a different type. Between 1905 and 1985, scientists had tracked the river flow of both the Amazon and Congo. Because the rivers drain the entire watershed basins of the two rainfall centers, their flows serve as surrogates for regional rainfall. Again, the analysis generated graphs that reflect a similar oscillation between flood and drought in the two regions, most dramatically during the southern hemisphere's rainy season: February, March and April.

"It looks somewhat obvious after you discover it," Eltahir said. "But nobody looked at the data before." Ph.D. candidate Arne Bomblies helped pull together the final analyses and paper.

"In the future, I'm interested in studying the physical mechanism behind this phenomenon and the extent of its global impact," he continued. "I hope to develop atmospheric models that describe the circulation in and around the two areas and globally. We could learn about precursors to climate conditions and be better prepared to handle the practical problems arising from severe hydrologic conditions."