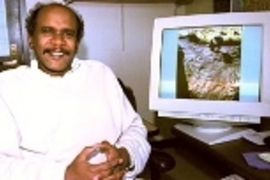 ↓ Download Image
Caption: Professor Elfatih Eltahir of civil and environmental engineering sits by a monitor showing rock art of a giraffe carved thousands of years ago when portions of the Sahara were still green.
ï¿½ï¿½ï¿½ï¿½ï¿½ï¿½
Credits: Photo / Donna Coveney 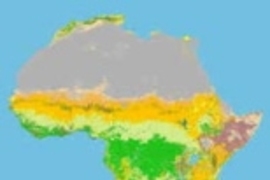 Caption:
Professor Elfatih Eltahir of civil and environmental engineering sits by a monitor showing rock art of a giraffe carved thousands of years ago when portions of the Sahara were still green.
ï¿½ï¿½ï¿½ï¿½ï¿½ï¿½
Credits:
Photo / Donna Coveney

Scientists at MIT who were trying to create accurate models of climate change in the southern portion of the Sahara desert found that including a realistic component of vegetation growth and decay was absolutely essential. Without including the vegetation as a variable (rather than a fixed parameter), the models were not able to show the region's transformation from a fertile expanse of vegetation 6,000 years ago to an arid stretch of mostly sand and mountains today.

"Vegetation is such an important component of the climate system that in this model, including the vegetation was the only way to explain what happened in the past," said Elfatih Eltahir, an author of the paper describing the research, which appeared in the Jan. 16 issue of the Journal of Geophysical Research.

"Looking at the past climate provides a reasonable way--perhaps the only way--to test models, which must be accurate if they're going to predict future climate changes," said Eltahir, a professor of civil and environmental engineering who studies hydroclimatology. "Scientists recognize that the ocean is an important component of the climate system. We are saying that vegetation over land regions is equally important."

Sometime during the past 6,000 years, the southern boundary of the Sahara desert moved 500 kilometers south, making the desert a much larger portion of northern Africa. The Sahara, the largest desert in the world, covers all of North Africa, from the Atlantic coast to the Red Sea. The "newly" arid area was once covered by lush green grasses and trees and was home to elephants, giraffes and other large wildlife. This includes portions of Sudan, Eltahir's native country.

The region has been studied considerably by archeologists and paleoclimatologists, who have found fossils in sediment taken from soil cores that prove it was home to a great variety of plants and animals. Cave drawings of many of the animals provide additional proof. Today, only smaller animals, such as antelope, hyena and jackals, live in the desert.

Eltahir and his research team chose this era (the Middle Holocene) for their models, because ice cores taken by climatologists show that the amount of carbon dioxide in the atmosphere was very similar to that of our own time. So CO2 became a fixed parameter in the model.

However solar radiation -- which fluctuates according to slow variations in the geometry of the Earth's orbit and has considerable impact on Earth's climate--was very dissimilar. Six thousand years ago, the geometrical aspects of Earth's orbit were significantly different from today. However, these changes in the Earth's orbital parameters, though necessary for triggering a retreat of the desert border, were found to be insufficient for fully explaining the extent of the change in the desert's area. The feedback involving vegetation changes amplified the model's response to the change in orbital parameters, and brought the model simulations close to the observations of paleoclimatologists.

Another interesting--and rather dire--aspect of the models is the indication that interference with the plants and animals making up the biosphere can induce an altered biosphere which may become fixed at a new and different climate equilibrium. Eltahir's models suggest that the erosion of that 500 kilometer swath of land from arable to arid was likely to have been sudden, occurring over decades and years, rather than a slow evolution over centuries.

"Sometimes nature reinforces whatever damage you do. We tend to think of nature as healing the damage we humans do. But in this case it seems to be a bit self-destructive," said Eltahir.

Co-authors on the study are former MIT graduate student Michelle M. Irizarry-Ortiz (lead author), now at the South Florida Water Management District in West Palm Beach, and Guiling Wang of the University of Connecticut. Funding was provided by NASA.