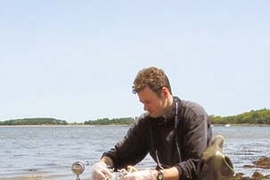 When Phil Gschwend exclaims "plastics!" it's hard not to think of the career advice given to Dustin Hoffman's character in "The Graduate." But Gschwend's enthusiasm for the material isn't about financial profit; he's using plastics to better understand chemicals in the environment.

In a project funded in part by MIT Sea Grant, Gschwend, a professor in the Department of Civil and Environmental Engineering, is using plastic to collect data on levels of organic pollutants in Boston Harbor waters and sediments. The data can be used to determine which areas pose risks to the animals living there--and the humans who eat them--and to make decisions about which areas should be targeted for cleanup efforts.

The traditional method for measuring chemicals in sediments and waters is to look at chemical levels in animals such as clams and mussels. But the levels accumulated by the animals do not correspond to researchers' models, Gschwend said. The levels in the animals were much lower than expected.

In part that mismatch was due to the presence of soots and chars. Collectively referred to as black carbons, these solids include diesel soot from buses and cinders from forest fires. Black carbons get carried by wind or washed out by rainwater and end up in places like Boston Harbor. There, says Gschwend, they mix with the mud and grab hold of many organic chemical pollutants, making it harder for the pollutants to move out of the muds and into animals.

Taking that process into account, AmyMarie Accardi-Dey (Ph.D. 2003) discovered that predictions of chemical levels using animal samplers were off by a factor of 40. (Accardi-Dey did her graduate work in the joint program between MIT and the Woods Hole Oceanographic Institution.)

Since animals are iffy indicators of what's around them in mud and water, various researchers decided to put out a material that would absorb the chemical of interest. Gschwend describes the first material chosen as "little bags of fat," plastic bags filled with the triglyceride triolein. Rachel Adams, a Ph.D. student in civil and environmental engineering, found that the bags often broke and lost the triolein. Eventually researchers realized that the plastic alone could do the job.

That plastic, Gschwend points out, is cheap, strong, easy to clean, and can be placed in air or water or mud for a short time to collect molecules of interest. "Anybody who's ever had milk go rancid in a plastic milk bottle knows you can't rinse out the plastic," he said. "It's going to stink for a long time because the smelly compounds have diffused into it."

Working in Quincy and Dorchester Bay, Gschwend and colleagues insert plastic strips into the mud and water column to accumulate chemicals for a day or two. Back in the lab, they analyze the strips to identify and quantify the chemicals.

Thus far, Gschwend says that the amount of pollutants indicated by the plastic samplers is less than what would have been expected, reinforcing the inferences of the model calculations. Another finding is that certain chemicals are being diffused from mud into water, while others appear to be moving from water into the mud.