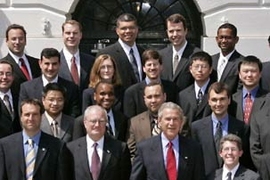 ↓ Download Image
Caption: Assistant Professor Martin L. Culpepper, in the center of the top row, poses with President Bush and fellow winners of the 2004 Presidential Early Career Awards for Scientists and Engineers in front of the White House on June 13.
Credits: Photo / Paul Morse, White House

Caption:
Assistant Professor Martin L. Culpepper, in the center of the top row, poses with President Bush and fellow winners of the 2004 Presidential Early Career Awards for Scientists and Engineers in front of the White House on June 13.
Credits:
Photo / Paul Morse, White House

Assistant Professor Martin L. Culpepper was honored at a White House ceremony with President Bush last month as one of 58 researchers to receive 2004 Presidential Early Career Awards for Scientists and Engineers.

The PECASE is the nation's highest honor for young professionals starting their research careers. Eight federal departments and agencies annually nominate young scientists and engineers expected to broadly advance science and technology that will be of the greatest benefit to those agencies.

Culpepper, of the Department of Mechanical Engineering, was nominated by the National Science Foundation. According to the NSF, he is "involved in research to advance the understanding of nanoscale positioning and manipulation, a critical element toward creating production-scale manufacturing and inspection processes and products."

"He gains valuable insights through close collaborations with automakers and photonics manufacturers. His creative education efforts include developing a hands-on undergraduate course in machine dissection and design, precision manipulation, and microelectromechanical system design and fabrication."

Culpepper is also cited for serving as "a mentor to minority students through many activities and organizations."

PECASE awardees receive funding for up to five years to further research in support of critical government missions.