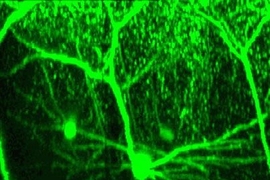 Despite the prevailing belief that adult brain cells don't grow, a researcher at the Picower Institute for Learning and Memory reports in the Dec. 27 issue of Public Library of Science (PLoS) Biology that structural remodeling of neurons does in fact occur in mature brains.

This finding means that it may one day be possible to grow new cells to replace ones damaged by disease or spinal cord injury, such as the one that paralyzed the late actor Christopher Reeve.

"Knowing that neurons are able to grow in the adult brain gives us a chance to enhance the process and explore under what conditions -- genetic, sensory or other -- we can make that happen," said study co-author Elly Nedivi, the Fred and Carole Middleton Assistant Professor of Neurobiology.

While scientists have focused mostly on trying to regenerate the long axons damaged in spinal cord injuries, the new finding suggests targeting a different part of the cell: the dendrite. "Dendrite," from the Greek word for tree, is a branched projection of a nerve cell that conducts electrical stimulation to the cell body.

"We do see relatively large-scale growth" in the dendrites, Nedivi said. "Maybe we would get some level of improvement (in spinal cord patients) by embracing dendritic growth." The growth is affected by use, meaning the more the neurons are used, the more likely they are to grow, she said.

The study's co-authors -- Nedivi; Peter T. So, an MIT professor of mechanical and biological engineering; Wei-Chung Allen Lee, an MIT brain and cognitive sciences graduate student; and Hayden Huang, a mechanical engineering research affiliate -- used a method called two-photon imaging to track specific neurons over several weeks in the surface layers of the visual cortex in living mice. While many studies have focused on the pyramidal neurons that promote firing, this work looked at all types of neurons, including interneurons, which inhibit the activity of cortical neurons.

With the help of technology similar to magnetic resonance imaging (MRI), but at a much finer, cellular resolution, the researchers were able to stitch together two-dimensional slices to create the first 3-D reconstruction of entire neurons in the adult cortex. Dendritic branch tips were measured over weeks to evaluate physical changes.

What the researchers saw amazed them.

In 3-D time-lapse images, the brain cells look like plants sprouting together. Some push out tentative tendrils that grow around, or retract from contact with, neighboring cells. Dendrite tips that look like the thinnest twigs grow longer. Of several dozen branch tips, sometimes only a handful changed; in all, 14 percent showed structural modifications. Sometimes no change for weeks was followed by a growth spurt. There were incremental changes, some as small as 7 microns, the largest a dramatic 90 microns.

"The scale of change is much smaller than what goes on during the critical period of development, but the fact that it goes on at all is earth-shattering," Nedivi said. She believes the results will force a change in the way researchers think about how the adult brain is hard-wired.

Nedivi had previously identified 360 genes regulated by activity in the adult brain that she termed candidate plasticity genes or CPGs. Her group found that a surprisingly large number of CPGs encode proteins in charge of structural change. Why are so many of these genes "turned on" in the adult well after the early developmental period of dramatic structural change?

The neuroscience community has long thought that whatever limited plasticity existed in the adult brain did not involve any structural remodeling, mostly because no such remodeling was ever detected in excitatory cells. Yet evidence points to the fact that adult brains can be functionally plastic. In response to the CPG data, Nedivi and Lee revisited this question with the help of So and Huang.

By applying an innovative new imaging technology that allows monitoring of neuronal structural dynamics in the living brain, they found evidence for adult neuronal restructuring in the less-known, less-accessible inhibitory interneurons.

"Maybe the inhibitory network is where the capacity is for large-scale changes," Nedivi said. "What's more, this growth is tied to use, so even as adults, the more we use our minds, the more robust they can be."

This work is supported by the National Eye Institute.

A version of this article appeared in MIT Tech Talk on March 1, 2006 (download PDF).

Several of the 2020 winning innovations apply artificial intelligence techniques to solutions for challenges to national security.