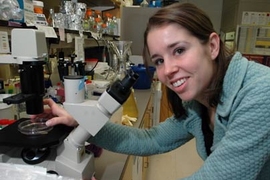 ↓ Download Image
Caption: Graduate student Danielle France works in the lab where she and others examined the phenomenal power of the nano-spring, a fibrous coil grown by a single-cell protozoan.
Credits: Photo / Donna Coveney 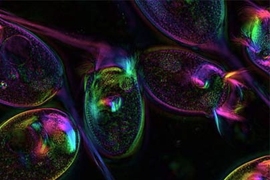 Caption:
Graduate student Danielle France works in the lab where she and others examined the phenomenal power of the nano-spring, a fibrous coil grown by a single-cell protozoan.
Credits:
Photo / Donna Coveney

Researchers have known for some time that a long, fibrous coil grown by a single-cell protozoan is, gram for gram, more powerful than a car engine. Now, researchers led by a team at MIT and the Whitehead Institute have found that this coil is far stronger than previously thought. In addition, the researchers have discovered clues to the mechanism behind this microscopic powerhouse.

"These findings are twofold," says Danielle France, a graduate student in the lab of Whitehead Member Paul Matsudaira, and, along with Matsudaira, a member of MIT's Division of Biological Engineering. "First, they give us an idea of how a cell can manage to generate such enormous force; and second, they provide clues for how engineers might reconstruct these mechanisms for nanoscale devices."

France presented her findings Sunday, Dec. 11, at the 45th annual meeting of the American Society for Cell Biology. Collaborators on the work are from the Marine Biological Laboratory in Woods Hole, Mass., and the University of Illinois, Chicago.

Scientists have known about this nano-spring for roughly 300 years, ever since Anton van Leeuwenhoek first observed the protozoan, Vorticella convallaria, through a handmade microscope. The spring in the unicellular Vorticella is a contractile fiber bundle, called the spasmoneme, which runs the length of the stalk.

At rest, the stalk is elongated like a stretched telephone cord. When it contracts, the spasmoneme winds back in a flash, forming a tight coil. To find out how strongly Vorticella recoils, France and colleagues used a unique microscope to apply an extra load to the spring. The microscope, developed by Shinya Inoue and colleagues at the Marine Biological Laboratory, uses a spinning platform to increase the centrifugal force exerted on the protozoan.

In the past, researchers have measured the Vorticella's ability to recoil its spring at 40 nano newtons of force and at a speed of 8 centimeters per second. (These measurements, when scaled up to the size of a car engine, prove the Vorticella to be the more powerful of the two.) However, when France used the centrifuge microscope, she discovered that the spring was able to recoil at as much as 300 nano newtons of force.

"This is the maximum amount of power we can currently test," France said. "We suspect the coil is even more powerful."

France and colleagues also made an important link between the cellular engine's fuel, calcium, and a major protein component of the stalk. This protein, centrin, belongs to a class of proteins that can be found in organisms ranging from green algae to humans. When the researchers introduced an antibody for the Vorticella centrin into the cell, the spring was no longer able to contract, indicating that the cell uses a powerful centrin-based mechanism, one that is unlike other known cellular engines.

"When it comes to creating nano devices, this is a great mechanism for movement," France said. "Rather than requiring electricity, this is a way to generate movement simply from a change in the chemical environment. Here, a simple change in calcium would power this spring." France and colleagues are now developing methods for replicating this mechanism in the lab.

For images of the Vorticella spring, and for a movie demonstrating the spring in action, visit www.wi.mit.edu/news/archives/2005/pm_1202_vor.html.

This research was funded by the U.S. Army.