Edwin Thomas to head Department of Materials Science and Engineering 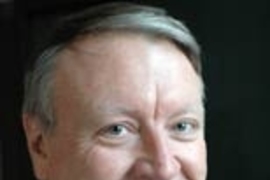 "Ned is a noted materials scientist and engineer, with specific expertise in polymer physics and engineering, phase transformations and microstructure, and electron microscopy and X-ray scattering," said Thomas L. Magnanti, dean of the School of Engineering, who announced the appointment.

Among other accomplishments, Thomas "has made important contributions to understanding the structure and properties of block copolymers and to developing quantitative methods for characterizing the microstructure of polymeric materials," Magnanti said. He has also "developed both new experimental methods and theoretical models to guide valid interpretation of the vast range of microstructures in crystalline, liquid crystalline and non-crystalline polymers," Magnanti said.

Thomas received the B.S. degree from the University of Massachusetts in 1969 and the Ph.D. from Cornell University in 1974.

In his announcement, Magnanti recognized the "outstanding service" of outgoing head Subra Suresh. "Under his superb leadership, the department has thrived, especially with the hiring of many exceptional faculty, exciting curricular innovations, and significant space renovations. It has been an enormous pleasure to collaborate with Subra and I very much look forward to working with Ned as well."