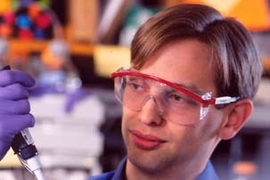 The 27-year-old M.D./Ph.D. student received the $30,000 Lemelson-MIT Student Prize for his inventive research with a new protein and a common coagulant that may help both stroke and cancer patients.

"While innovation is common at MIT and in our lab, David's ability to produce such a wide variety of inventions with such tremendous clinical potential is rare," said Robert Langer, the Germeshausen Professor of Chemical and Biomedical Engineering at MIT and one of Berry's advisors, in his recommendation letter.

"He passionately seeks to push traditional understanding and conventional boundaries to create entities to treat disease or greatly improve the standard of care," said Langer.

According to the American Stroke Association, someone in America has a stroke every 45 seconds. The FDA has approved only one drug for the treatment of stroke victims, and that must be administered within three hours of the stroke.

"It's not always easy for people to tell they are having a stroke," said Berry, a graduate student in the Harvard-MIT Division of Health Sciences and Technology. "Right now, there is a very short window of time in which people can be treated effectively. I thought there had to be another alternative that could give victims and doctors more time and a better chance for recovery."

Working in the lab of Ram Sasisekharan, a professor of Biological Engineering and another of Berry's advisors, Berry and co-workers at MIT conceived the idea of a new protein, called dimeric FGF2, or dFGF2 for short. This protein synthetically induces the combined effects of heparin, a common anticoagulant, and a protein called fibroblast growth factor, or FGF2, which helps with the formation of new blood vessels.

If given within 24 hours of a stroke, dFGF2 can limit the amount of brain tissue damage. If given after 24 hours, it can substantially improve the patient's rate of functional recovery, which the current treatment does not do. Because dFGF2 can be given in small doses, it also reduces serious side effects, such as extreme weight loss.

"David's dFGF2 invention has already been patented and licensed and it is moving toward entering clinical trials," Langer said. "This is an incredible achievement for any student, much more so to have been completed within six months of entering a lab."

In addition to developing a new application to potentially treat strokes, Berry's studies of internalized heparin have also led to a promising new technique for treating cancer.

"Through my work with dFGF2 and my observations of how heparin interacts with other compounds, I started thinking about the potential impact it could have treating cancer," Berry said. "I discovered that by binding heparin to a polymer and delivering it to the body, I could attack the cancer cells but leave the surrounding healthy cells unharmed."

Due to the specific chemical makeup of his heparin-polymer conjugate, Berry found that most of it is absorbed by cancerous cells in the body, instead of by healthy cells.

"With this single invention, David made several innovations to create a new way to potentially treat a wide variety of cancers," Sasisekharan said in his recommendation letter.

"My ultimate career goal is to help improve the quality of peoples' lives," Berry said. "What I appreciate most about science and research is that, although you don't aid people on a day-to-day basis as physicians do, you have the potential to impact society as a whole."

A version of this article appeared in MIT Tech Talk on February 16, 2005 (download PDF).