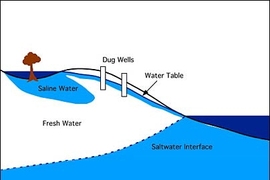 ↓ Download Image
Caption: A model of the way the tsunami may have contaminated coastal wells: tsunami waves brought seawater to inland areas where it pooled for several days, before migrating back toward the coast with groundwater flow.
Credits: Graphic courtesy / Charles Harvey 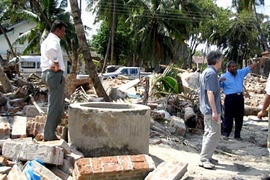 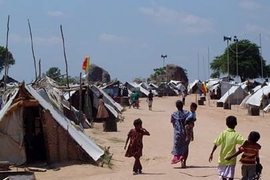 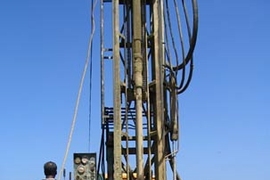 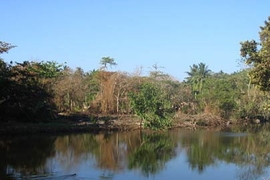 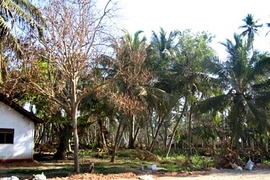 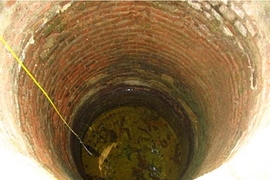 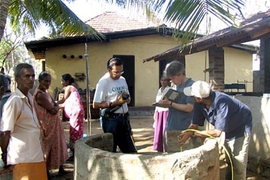 Caption:
A model of the way the tsunami may have contaminated coastal wells: tsunami waves brought seawater to inland areas where it pooled for several days, before migrating back toward the coast with groundwater flow.
Credits:
Graphic courtesy / Charles Harvey

Caption:
Personnel from the Water Resources Board in Sri Lanka drill for water in a displaced persons' camp in Amparai.
Credits:
Photo courtesy / Charles Harvey

Caption:
Recovering vegetation along the coastal highway is mixed in with trees that died following the tsunami.
Credits:
Photo courtesy / Charles Harvey

MIT professor Charles Harvey and colleagues Tissa Illagasekera from the Colorado School of Mines and Jayantha Obeysekera from the South Florida Water District traveled to Sri Lanka to investigate the impact of December's Indian Ocean tsunami on local drinking wells.

Harvey, an associate professor in MIT's Department of Civil and Environmental Engineering, kept a log of the team's findings, excerpts of which appear below.

Our team's first meeting was with the faculty at University of Peradenya in Sri Lanka. The team--Tissa Illagasekera from the Colorado School of Mines, Jayantha Obeysekera from the South Florida Water District, and Charles Harvey from MIT -- is on a fact-finding mission sponsored by the National Science Foundation to determine how groundwater resources have been affected by the tsunami. We learned at the university that in the affected coastal settlements there are 20,000 or more shallow dug wells and many of these now contain water with levels of salinity too high to drink. The chairman of the Sri Lanka Water Resources Board, Atula Senarafne, presented a conceptual model of how the tsunami may have contaminated coastal wells: seawater infiltrated in the flooded zone, much of it inland where it was trapped and remained ponded for several days. The saline water then migrates back towards the coast with regional groundwater flow.

We awoke at the regional Irrigation Circuit Bungalow located in Amparai, one of the worst affected regions. After meeting with faculty at Southeastern University involved in field studies, we made our first trip to the Tsunami Disaster Zone in Amparai where a densely populated area has been largely destroyed by the waves. Using a refractometer, we found salinity here at a level of ~6 parts per thousand in domestic wells.

At a camp for displaced people, we met state hydrogeologists who are drilling a well even with the recognition that the yield will not be sufficient to provide water for a settlement of nearly 700 displaced people. The settlement is built where there is no surface water and wells are poor yielding (low-conductivity silty sediment overlays metamorphic rock with poor-yielding fractures). This was our first opportunity to meet with field personnel from the Water Resources Board who are assigned with the challenging task of finding water in locations where no surface water supplies are available. The task of finding water is not limited to this settlement, but also to many other areas where alternate sources of water are needed for new construction. A need exists for better subsurface characterization methods and modeling tools to make decisions on developing these alternate supplies.

Today we drove along the coastal highway with many stops to inspect domestic water supply wells and the impact of the saltwater on natural vegetation. Except for coconut trees, most other plants and trees in areas flooded by tsunami waves were dying, although in one place we observed that the vegetation was recovering, possibly due to heavy rainfall immediately after the tsunami. Almost all the wells in this coastal zone are open-pit type, dug in sandy soils. These wells are still contaminated with saline water making them unusable for domestic use. Although most coastal areas have piped surface water from inland, the residents in these regions rely on domestic wells for other water needs (bathing, washing, etc.). Thus, if this water supply is unavailable for an extended period, an alternate source must be found. Since the surface water supply sources are being exhausted for most of the municipal water supply, finding alternative water supplies is a challenging task for the Water Supply and Drainage Board of Sri Lanka. This particular issue further demonstrates the need for integrated management of water resources for urban, agricultural and environmental purposes.

Today, we also met a group of scientists from Japan and Thailand who are working with the Sri Lankan government agencies to collect high-resolution topographic data for mapping major coastal towns for the purpose of testing tsunami simulation models. Most of the basic data necessary for simulation modeling are very scarce and a major effort is needed to assemble such data for post-tsunami reconstruction efforts.

We focused on quantifying the salinity impacts by making measurements in coastal wells using a probe donated by In-situ Inc. The probe measures vertical profiles of electrical conductivity, temperature and turbidity. We interviewed well owners about the conditions of the wells before and immediately after the tsunami. Three types of wells were tested. The first was a domestic well used by a single family. Prior to the tsunami, this well was used primarily for washing and bathing but was also used for drinking when the piped supply got interrupted. The well is not useable now. The salinity was around 6 ppt with stratification. The second, a public well that was restored, showed complete mixing with salinity around 4 ppt. The third, a domestic well that was not disturbed, showed high salt levels with stratification. These limited observations suggest that the condition of the wells depends on their location and the level of post-tsunami interference.