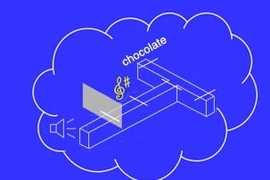 ↓ Download Image
Caption: MIT researchers used laboratory rats in a maze to study what happens when the brain forms a habit. Rats learned to associate the location of a sound, at left in diagram, with the location of a food reward. The researchers then changed the environment by removing the reward, in effect breaking the habit. When the reward was restored, however, the neural pathways created by the habit immediately reformed within the brains of the rats.
Credits: Image courtesy / Brandy Baker

Caption:
MIT researchers used laboratory rats in a maze to study what happens when the brain forms a habit. Rats learned to associate the location of a sound, at left in diagram, with the location of a food reward. The researchers then changed the environment by removing the reward, in effect breaking the habit. When the reward was restored, however, the neural pathways created by the habit immediately reformed within the brains of the rats.
Credits:
Image courtesy / Brandy Baker

Habits help us through the day, eliminating the need to strategize about each tiny step involved in making a frothy latte, driving to work and other complex routines. Bad habits, though, can have a vise grip on both mind and behavior. Notoriously hard to break, they are devilishly easy to resume, as many reformed smokers discover.

A new study in the Oct. 20 issue of Nature, led by Ann Graybiel of MIT's McGovern Institute, now shows why. Important neural activity patterns in a specific region of the brain change when habits are formed, change again when habits are broken, but quickly re-emerge when something rekindles an extinguished habit -- routines that originally took great effort to learn.

"We knew that neurons can change their firing patterns when habits are learned, but it is startling to find that these patterns reverse when the habit is lost, only to recur again as soon as something kicks off the habit again," said Graybiel, who is also the Walter A. Rosenblith Professor of Neuroscience in MIT's Department of Brain and Cognitive Sciences (BCS).

In the Graybiel experiments, rats learned that there was a chocolate reward at one end of a T-maze. When the rats were learning, the neurons were active throughout the maze run, as if everything might be important. As the rats learned which cues (audible tones) indicated which arm of the maze led to the chocolate, the neurons in the basal ganglia learned, too.

After the rats had thoroughly learned the cues, the neurons interested in the task fired intensely at the most salient parts of the task -- the beginning and the end. But these neurons became quiet as the rats ran through the familiar maze, as if exploiting their knowledge to focus on efficiently finding the reward. Other "disinterested" neurons became quiet during the maze run, perhaps so as not to bother the critical neural signals.

Then the researchers removed the reward, making the cues meaningless. This change in training made everything in the maze became relevant again, and the neurons reverted to chattering throughout the run. The rats eventually stopped running (gave up the habit), and the new habit pattern of the brain cells disappeared. But as soon as the researchers returned the reward, the learned neural pattern, with the beginning and ending spikes, appeared again.

"We tried to simulate the learning and forgetting of a habit," Kubota said. "If a learned pattern remains in the brain after the behavior is extinguished, maybe that's why it's so difficult to change a habit."

"It is as though somehow, the brain retains a memory of the habit context, and this pattern can be triggered if the right habit cues come back," Graybiel said. "This situation is familiar to anyone who is trying to lose weight or to control a well-engrained habit. Just the sight of a piece of chocolate cake can reset all those good intentions."

Graybiel speculates the beginning and ending spike patterns reflect the nature of a routine behavior: Once we start, we run on autopilot -- until we stop. Certain disorders hint at the potential importance of those spikes. Parkinson's patients, for instance, have difficulty starting to walk, and obsessive-compulsive people have trouble stopping an incessant activity.

"We are hopeful that this may be a key to understanding how to treat bad habits like addiction, and also how to encourage good habits that benefit health and happiness," Graybiel said. "We think that these patterns will also help researchers to understand the fundamental problems in disorders such as Parkinson's disease, OCD and Tourette syndrome."

The National Institutes of Health and the Office of Naval Research supported this research.

A version of this article appeared in MIT Tech Talk on November 9, 2005 (download PDF).