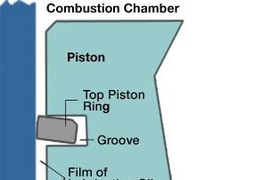 ↓ Download Image
Caption: A schematic cross section of the wall of an engine cylinder and the piston.
Credits: Source / Laboratory for Energy and the Environment

Caption:
A schematic cross section of the wall of an engine cylinder and the piston.
Credits:
Source / Laboratory for Energy and the Environment

Design changes to an engine commonly used to power factories and residential buildings will result in increased fuel efficiency and reduced emissions, according to a team of MIT researchers.

Using a new computer model and experiments in a full-scale engine, the researchers identified subtle design changes that can reduce friction in a type of large, natural gas-fired engine capable of providing electricity to a large building. Given the widespread use and continuous operation of this type of engine, the researchers anticipate significant fuel savings and emissions reductions.

The natural gas-fired reciprocating engine is a large, reliable, rugged engine ideal for small-scale power generation. A single unit can power a factory or provide both electricity and heat to an apartment complex.

"These engines generally run continuously, so making them more efficient will save a lot of fuel over time," said Victor W. Wong, a principal research scientist at MIT and lecturer in the Department of Mechanical Engineering. Wong and colleagues in the Sloan Automotive Laboratory and the Laboratory for Energy and the Environment have been focusing on improving the efficiency of several different types of engines.

In a natural gas-fired reciprocating engine, less than 40 percent of the energy in the fuel ends up as electricity, in part because friction reduces efficiency. As with a car engine, the natural gas-fired engine contains a series of cylinders, each housing a piston that moves up and down. Three metal rings mounted in grooves around the piston slide along a film of lubricating oil on the cylinder wall as the piston moves.

The MIT team examined the individual components, how they fit together, and how they behave and interact when the engine is running. But just determining friction is not enough. "We have to make sure that we don't simultaneously increase emissions or oil consumption or wear on the engine," said Wong. "That means we have to look at the detailed characteristics of the surfaces, including submicron peaks and valleys on the piston and rings."

Guided by the model, the researchers identified key sources of ring-related friction and defined three design modifications that might help. They changed the shape and tilt of the top ring and reduced the outward springiness of the oil-control ring.

To validate their model and its findings, the researchers turned to collaborators at Colorado State University, who operate a huge test facility for large stationary engines. To measure the effects of the proposed design changes, the Colorado researchers ran tests using rings and other components made according to MIT's specifications. The analytical results were comparable to the measurements taken in the experimental engine.

The computer model suggests that making all three changes at once would improve overall fuel economy by about five percent. "That's by no means a negligible gain," said Wong. "It'll result in significant fuel savings and a substantial reduction in emissions over the life of the engine."

This research is supported by the U.S. Department of Energy.