Burned-out but diligent, a TA gets help from his students 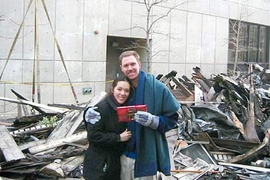 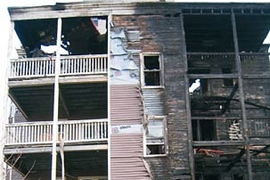 When chemistry teaching assistant Wes Austin showed up for his office hours on Dec. 1 after spending the night watching his home burn and most of his possessions ruined in a fire, his students were touched by his diligence.

A week later the freshmen in general chemistry (5.111) presented Austin with cards signed by each of them and more than $400 in cash they had collected to help him get back on his feet.

"I started to cry," said Austin. "It was absolutely awesome and wonderful."

The cause of the fire that devastated the 10-unit apartment building in Cambridge's Central Square is still unknown.

Austin, a Ph.D. candidate who bought his condominium in July, was home at 10:30 p.m. when he heard the fire alarm. Being a veteran of many false alarms, Austin didn't believe it was a fire, but he gathered up his six-month old kitten, Maya ("she tried to hide behind the couch, but I dragged the couch out and got her," said Austin) and he and his roommates headed outside. "When I looked back there were flames coming out," he said.

It took firefighters 12 hours to extinguish the blaze.

Though he had not slept and was still reeling, Austin showed up for office hours the next morning. "There was nothing I could do at the apartment," he said. "I couldn't fix it so I might as well be at work."

One of his freshman students, Stephanie Chiang, saw Austin that morning. Immediately, she knew something was wrong. "He looked exhausted," she said. When she learned of the fire, Chiang sprung into action, e-mailing the class, her dorm (McCormick Hall), even alumni on the dorm's mailing list. In just one week, she had gathered enough funds to present to Austin on the morning of the last class of the semester. "He has been a really good TA, always open to us all," said Chiang. "It was time for someone to help him out."

Austin's unit was spared from the fire, but the extensive water damage ruined photos, furniture and appliances. Later, looters stole his standing mixer, video game unit, some clothing and other things.

Chiang and other volunteers received dozens of checks and cash, including one check from an alumna. They also received offers of furniture and other items to donate to Austin, who is currently renting an apartment in the same area. Though Austin was insured, he needs to pay for all the new items up front. "It will be okay eventually and everything irreplaceable was saved," he said. "But this helps a lot."

"It was wonderful to see how appreciated he is by his students," said Catherine Drennan, an associate professor of chemistry who teaches 5.111 and watched the Dec. 8 presentation. "It was also heartwarming to observe the generosity of spirit of this freshman class."

Though thrilled to be able to help, Chiang said she was not surprised by the kindness in her fellow students. "The MIT community really feels like a community," said Chiang. "We all help each other out."