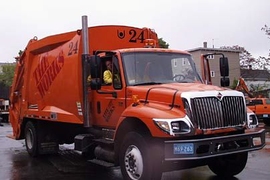 ↓ Download Image
Caption: City of Cambridge truck that will be outfitted with diesel-emission controls through an EPA-funded collaboration between MIT and Cambridge.
Credits: Photo courtesy / City of Cambridge 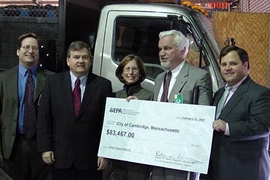 Caption:
City of Cambridge truck that will be outfitted with diesel-emission controls through an EPA-funded collaboration between MIT and Cambridge.
Credits:
Photo courtesy / City of Cambridge

The City of Cambridge and MIT will collaborate to significantly reduce diesel pollution from their respective vehicle fleets over the next two years, thanks to a grant from the U.S. Environmental Protection Agency announced Feb. 23. The grant is one of 18 awarded nationwide from a pool of 83 applicants.

Through the Clean Diesel Collaborative for a Healthy Cambridge, MIT and the city will retrofit 34 medium- and heavy-duty vehicles with advanced pollution control equipment (including catalyzing equipment and filters). The goal is to reduce emissions per vehicle 40 to nearly 70 percent for some pollutants.

Like many cities, Cambridge has a large population of people who are especially vulnerable to air pollution, particularly diesel emissions. Exposure to diesel pollution has been linked to numerous health conditions, including asthma, heart disease and cancer. The Cambridge Health Alliance identified childhood asthma as a priority health concern in its 2004 Cambridge Public Health Assessment.

"Partnering with the City of Cambridge in EPA's voluntary diesel retrofit program is one way that MIT is demonstrating its strong commitment to excellence in environmental stewardship," said Jamie Lewis Keith, MIT's senior counsel and managing director for Environmental Programs and Risk Management.

"This initiative offers an innovative approach to realizing measurable reductions in air pollutants, strengthening collaborative ties, and demonstrating new technologies that drive excellent environmental performance on campus and throughout the city. MIT is extremely grateful to the EPA for selecting our joint proposal with the city," Keith said.

"We intend to use this collaborative project not only to make significant reductions in our own emissions, but also to share our experience and demonstrate to others the feasibility of the technology so that it can be more widely adopted," said Steven Lanou of MIT's Environmental Programs Office, who is spearheading the effort for MIT. "The more we can diffuse the technology across diesel fleets, the greater the environmental benefits we can achieve."

Laxmi Rao and Norm Magnuson of MIT's Department of Facilities are leading the implementation. They worked with Lanou to develop MIT's proposal.

The EPA grant of $83,467 through the agency's Voluntary Diesel Retrofit Grant Program will launch the new initiative and cover the implementation costs. The Massachusetts Port Authority (Massport) also received a grant through this program.

The new collaborative marks the second major phase of the City of Cambridge's effort to reduce emissions from its working vehicles. Last fall, as part of the first phase, the city adopted the use of biodiesel--a clean-burning alternative fuel produced from domestic sources--for the majority of its large vehicle fleet. Now more than 80 city-owned vehicles, including garbage trucks, construction vehicles, and about a dozen city-owned school buses, run on biodiesel.

The collaborative marks an expansion of MIT's efforts to improve the environmental performance of its vehicles; through the program, MIT will introduce biodiesel for the first time into its diesel vehicles.

The Clean Diesel Collaborative for a Healthy Cambridge is a joint effort with MIT's Environmental Programs Office and Department of Facilities, and Cambridge's Departments of Public Works and Community Development.