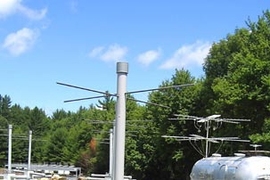 If you want to hear a little bit of the Big Bang, you're going to have to turn down your stereo.

That's what neighbors of MIT's Haystack Observatory found out. They were asked to make a little accommodation for science, and now the results are in: Scientists at Haystack have made the first radio detection of deuterium, an atom that is key to understanding the beginning of the universe. The findings are being reported in an article in the Sept. 1 issue of Astrophysical Journal Letters.

The team of scientists and engineers, led by Alan E.E. Rogers, made the detection using a radio telescope array designed and built at the MIT research facility in Westford, Mass. Rogers is currently a senior research scientist and associate director of the Haystack Observatory.

After gathering data for almost one year, a solid detection was obtained on May 30.

Also, an accurate measurement of deuterium would be an indicator of the density of cosmic baryons, and that density of baryons would indicate whether ordinary matter is dark and found in regions such as black holes, gas clouds or brown dwarfs, or is luminous and can be found in stars. This information helps scientists who are trying to understand the very beginning of our universe.

In addition, our modern lifestyle, filled with gadgets that use radio waves, presented quite a challenge to the team trying to detect the weak deuterium radio signal. Radio frequency interference bombarded the site from cell phones, power lines, pagers, fluorescent lights, TV, and in one case from a telephone equipment cabinet where the doors had been left off. To locate the interference, a circle of yagi antennas was used to indicate the direction of spurious signals, and a systematic search for the RFI sources began.

At times, Rogers asked for help from Haystack's neighbors, and in several instances replaced a certain brand of answering machine that was sending out a radio signal with one that did not interfere with the experiment. The interference caused by one person's stereo system was solved by having a part on the sound card replaced by the factory.

The other members of the team working with Rogers are Kevin Dudevoir, Joe Carter, Brian Fanous and Eric Kratzenberg (all of Haystack Observatory) and Tom Bania of Boston University.

The Deuterium Array at Haystack is a soccer-field size installation conceived and built at the Haystack facility with support from the National Science Foundation, MIT and TruePosition Inc.