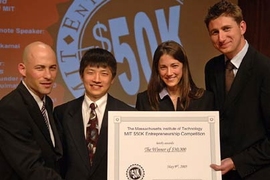 For the fourth year in a row, a medical device company has won the Robert P. Goldberg Grand Prize in the MIT $50K Entrepreneurship Competition held Monday, May 9, at MIT. Balico, which has designed a wearable balance aid that will benefit aging adults and individuals whose primary sensing systems are affected by disease, was awarded $30,000 in startup money.

The oldest and best known among university business plan competitions, the MIT $50K has launched more than 80 companies from teams that have competed. These companies--which include Akamai Technologies and others acquired by Microsoft, Motorola and Broadcom--have, in turn, employed more than 1,600 people and have a valuation of over $4 billion.

Seven finalists were chosen from 86 entrants with 250 team members participating. Judges, including noted venture capitalists, entrepreneurs and patent lawyers, selected the winning teams based on their potential of becoming leading firms. This year's other finalists were HealRight, Previva Inc., Renal Diagnostics and TissueVision.

"The MIT $50K's value is in the learning how to become an entrepreneur," said Lawrence Walmsley, a co-lead organizer and student at MIT Sloan. "Participants take a new business idea, build a team around it, formulate a strategic mission, and develop and articulate it into a business plan. With mentoring available through the $50K, they hone their pitching skills and have an opportunity to present to industry specialists, which often results in the launch of a real business." Along with the winners, the majority of the finalists and other entrants report that they are planning to launch businesses built around their business plans.