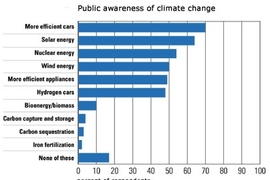 ↓ Download Image
Caption: Chart displays responses to the following question: 'Have you heard of or read about any of the following in the past year? Check all that apply.'
Credits: Graphic courtesy / Laboratory for Energy and the Environment

Caption:
Chart displays responses to the following question: 'Have you heard of or read about any of the following in the past year? Check all that apply.'
Credits:
Graphic courtesy / Laboratory for Energy and the Environment

Climate change and the threat of global warming are poorly understood by the U.S. public, and taking action to reduce their impact is not a high priority, according to a recent MIT survey.

These results suggest that change in U.S. climate policy will not be led by public opinion. Elected officials will have to provide leadership--a task they will find difficult because achieving significant reduction of the greenhouse gases linked to climate change may involve economic costs well above what the average consumer is willing to pay.

For more than a decade, Howard J. Herzog and his colleagues at MIT's Laboratory for Energy and the Environment (LFEE) have been studying one approach to climate-change mitigation. In carbon-dioxide (CO2) capture and storage (CCS), the CO2 emissions from large sources that contribute to global warming are captured and injected into geologic formations for long-term storage.

CCS has technologic and economic promise, but public acceptance could be a problem. As a result, the researchers wanted to find out what people thought about CCS in particular and about climate change and environmental issues in general.

The 1,200 respondents proved to be relatively unaware not only of CCS but also of other energy-related responses to climate change that were listed in the survey. The researchers were not surprised that CCS fell under the radar for the general public. It was more surprising that many of the respondents also had not recently heard or read about hydrogen cars, wind energy or nuclear energy.

Most striking: Fully 17 percent of the people had heard or read about none of the listed items during the past year.

The survey further found that the environment and climate change are not high-priority issues for the public. The environment came out 13th on a list of 22 possibilities for "the most important issues facing the U.S. today." And on a list of 10 specific environmental problems, "global warming" came up sixth, well behind water pollution and toxic waste.

What do the survey results mean for public outreach on climate change issues? Researchers concluded that education is critical. Programs should start with the fundamentals, helping people to understand the links between burning fossil fuels, greenhouse gas emissions and the potential for climate change. Perhaps most important, researchers said discussions must include the relative costs of the various technology options, as cost differentials can profoundly influence people's preferences.

In continuing their work on CCS, the MIT researchers plan to administer the same survey in two or three years to measure the evolution of public awareness. In the meantime, they are working with their Alliance for Global Sustainability (AGS) partners to analyze similar surveys taken in Japan, the United Kingdom, and Sweden.

This research was supported by the AGS and the Carbon Sequestration Initiative.

A version of this article appeared in MIT Tech Talk on March 16, 2005 (download PDF).