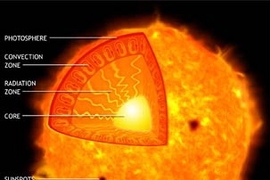 ↓ Download Image
Caption: An illustration of convection in a sun-like star. Neon, along with atoms of carbon, nitrogen and oxygen, plays an important role in regulating the rate at which energy flows from nuclear reactions in the Sun's core to its surface.
Credits: Image / NASA/CXC/M.Weiss

Caption:
An illustration of convection in a sun-like star. Neon, along with atoms of carbon, nitrogen and oxygen, plays an important role in regulating the rate at which energy flows from nuclear reactions in the Sun's core to its surface.
Credits:
Image / NASA/CXC/M.Weiss

A new survey of the sun's neighboring stars suggests there is nearly three times more neon in the sun than previously believed, thus solving a theoretical conundrum about the way the sun transfers heat and light from its core to its surface.

"We use the sun to test how well we understand stars and, to some extent, the rest of the universe," said Jeremy Drake of the Harvard-Smithsonian Center for Astrophysics in Cambridge, Mass. "But in order to understand the sun, we need to know exactly what it is made of," he added.

Drake and Paola Testa, a postdoctoral associate at the Kavli Institute for Astrophysics and Space Research at the Massachusetts Institute of Technology, published a scientific study on neon in the sun in the July 28 issue of Nature. They used NASA's Chandra X-ray Observatory to make their measurements.

Knowing how much neon is present is key to developing theoretical models of the sun, but scientists are not sure exactly how much neon the sun contains. The previously accepted figure was about three times lower than necessary to explain the energy flow in the sun's convection zone, which extends from near the surface inward approximately 125,000 miles.

Neon atoms, along with carbon, oxygen and nitrogen, play an important role in how quickly energy flows from nuclear reactions in the sun's core to its edge, from which it radiates into space. The rate of this flow determines the location and size of the sun's convection zone, where the gas undergoes a rolling, convective motion much like the unstable air in a thunderstorm. Nearly all of the energy emitted at the surface of the sun is transported there by convection, according to Drake.

Until now, the predicted location and size of the solar convection zone disagreed with deductions based on solar oscillations, a technique astronomers previously relied on to probe the sun's interior.

Because neon atoms give off no signatures in visible light, the measurements have been difficult to obtain. However, neon shines brightly in X-rays that can be observed in the white corona surrounding them during solar eclipses. But observations of the sun's corona are difficult to analyze, so instead, Drake and Testa observed the neon content of neighboring stars.

They found that on average, 21 sun-like stars within 400 light years of Earth have almost three times more neon than scientists believed the sun contained.

"Either the sun is a freak in its stellar neighborhood, or it contains a lot more neon than we think," said Testa.

These results reassured astronomers as to the accuracy of the physical theory behind the solar model, which is used as a basis for understanding the structure and evolution of other stars and understanding other areas of astrophysics.

"If the higher neon abundance measured by Drake and Testa is right, then it is a simultaneous triumph for Chandra and for the theory of how stars shine," said John Bahcall of the Institute for Advanced Study in Princeton, N.J., an expert in this field.