Cells discovered at MIT may play role in lung cancer 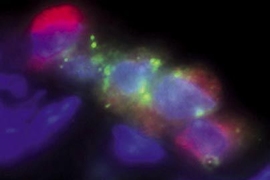 Researchers at the MIT Center for Cancer Research have discovered the first stem cells of the lung, cells that could be responsible for one type of lung cancer.

This finding may aid in the development of early detection strategies for lung cancer, the leading cause of death from cancer worldwide. The work appears in the June 17 issue of Cell.

"This work has identified a new population of cells that links the normal biology of the lung to lung cancer development," said Tyler Jacks, David H. Koch Professor of Biology, Center for Cancer Research (CCR) director and leader of the MIT team.

The research team utilized a mouse model of lung adenocarcinoma, the most common subtype of non small cell lung cancer.

"We identified a population of cells that were quite rare in the normal lungs, but increased in the lungs of cancer-prone mice before tumors developed. This indicated that they may be the first cells to respond to the genetic defect in this mouse model, ultimately resulting in cancer," said Carla Bender Kim, CCR postdoctoral fellow and lead author of the study.

The team suspected that they might actually be stem cells, which are unspecialized cells that maintain an adult tissue and are thought to play a role in the formation and maintenance of tumors.

In order to study them further, Bender Kim and her colleagues developed a novel method to separate and isolate the cells according to the unique combination of proteins present on their surface. The researchers then showed that the cells possess the ability to self-renew and develop into multiple different cell types in the lung -- the two hallmark features of stem cells. They named them BASCs, or bronchioalveolar stem cells, a reference to their ability to develop into both bronchiolar and alveolar epithelial cells of the lung.

Improved knowledge of stem cell populations in the adult lung could allow for new approaches to the treatment of chronic diseases of the lung.

Although lung cancer is the third most commonly diagnosed cancer, it has the highest mortality rate because the majority of lung cancers are detected at an advanced stage of disease in which the tumor has spread beyond the lung. In these cases, the five-year survival rate is very low, whereas the survival rate for patients with early stage, localized lung cancer is 50 percent.

"This work holds great promise for developing more effective methods of detecting tumors early enough to treat them effectively," said Jacks, who is also an investigator for the Howard Hughes Medical Institute. "The existence of these cells in established tumors may also be very important for cancer therapy."

Support for this work comes from the Howard Hughes Medical Institute and the Mouse Models of Human Cancer Consortium of the National Cancer Institute. Bender Kim is a Merck Fellow of The Jane Coffin Childs Memorial Fund for Medical Research.