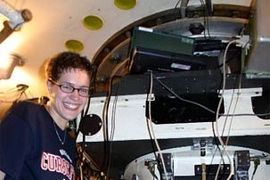 ↓ Download Image
Caption: Emily Levesque, a junior in physics, observed red supergiant stars in the Milky Way as a member of an international team that used this telescope at the Cerro Tololo Inter-American Observatory in Chile in November 2004.
Credits: Photo / Phil Massey, Lowell Observatory 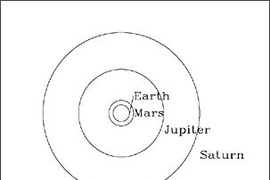 ↓ Download Image
Caption: The size of the star KY Cygni is shown in comparison to Betelgeuse, one of the largest stars previously known. KY Cygni has a diameter about 1,500 times larger than the sun.
Credits: Graphic / Philip Massey, Lowell Observatory

Caption:
Emily Levesque, a junior in physics, observed red supergiant stars in the Milky Way as a member of an international team that used this telescope at the Cerro Tololo Inter-American Observatory in Chile in November 2004.
Credits:
Photo / Phil Massey, Lowell Observatory

Caption:
The size of the star KY Cygni is shown in comparison to Betelgeuse, one of the largest stars previously known. KY Cygni has a diameter about 1,500 times larger than the sun.
Credits:
Graphic / Philip Massey, Lowell Observatory

An MIT undergraduate who says she's been interested in astronomy for "as long as I can remember" is lead author of an upcoming paper announcing the discovery of three stars that have the largest diameters of any normal stars known, more than a billion miles across.

Emily Levesque, a junior in physics, presented the work at a recent American Astronomical Society meeting, where it caught the attention of many reporters and resulted in stories in a variety of media, from USA Today to CNN and space.com.

Levesque was part of an international team that studied 74 red supergiant stars in the Milky Way. Red supergiants, massive stars nearing the ends of their lifetimes, are extremely cool and luminous--and very large.

"The aim of the project was to re-determine the effective temperature scale of these supergiants," said Levesque. That's because there has been significant disagreement between the theory of how large and cool these stars should be, and how large and cool astronomers actually observe them to be.

This research finally reconciles theory and observation. According to Philip Massey, an astronomer at Lowell Observatory and the project's leader, "The problem in this case turned out not to be the theory, but the observations--the conversion between the observed qualities (brightness and spectral type) and the deduced properties (temperature and luminosity and/or size) needed improvement."

With the new temperature scale in hand, "we calculated the radii of the red supergiants, and found that they were extremely large," said Levesque, who got involved in the work through the National Science Foundation's Research Experience for Undergraduates program at the Lowell Observatory.

Three of the stars have radii about 1,500 times that of the sun, or about seven astronomical units (AU). The previous record holder comes in a close fourth in size. For comparison, the well-known red supergiant star Betelgeuse in the constellation Orion has a radius of about three AU.

Levesque has been involved in the research since last summer, when she traveled to Kitt Peak National Observatory with Massey, her advisor.

"We observed for five perfectly clear nights, quite an anomaly in astronomy," Levesque recalls. "It was my first observing run and my first experience working with a large telescope. We operated the telescope ourselves and got fabulous data. Getting a chance to observe, reduce AND analyze the data was really excellent."

"I think the 'untold story' of all of the press coverage is the fact that Emily, as an undergraduate, took much of the data, reduced it, analyzed it, participated as a full colleague in figuring out what it all means, is first author on the Astrophysical Journal paper, and presented the results at the AAS meeting in San Diego," said Massey, Levesque's supervisor on the work. "While I've worked with many exceptional undergraduates over the year, I think that Emily has clearly distinguished herself."

Last November Levesque and Massey observed red supergiants in the Magellanic Clouds using a telescope at the Cerro Tololo Inter-American Observatory in Chile. "The second observing run was just as fun as the first, and the trip to Chile was great. We haven't yet analyzed that data," Levesque said.

Levesque's parents introduced her to astronomy when she was a young child. "I've been hooked ever since," she said. Coming to MIT, she said, "I planned from the start to be a physics major with an eye towards eventually doing astronomy. All the astronomy classes I've taken here have been very excellent." She plans now to get a Ph.D. in astronomy and try for a tenure-track job at a research facility or university.

Other researchers involved in this work are from the Lowell Observatory, Cerro Tololo, the Universite de Montpellier II, and the Geneva Observatory. Support was from the NSF.