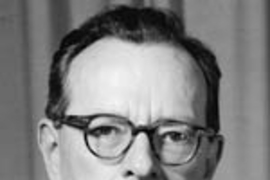 George W. Whitehead Jr. of Winchester, Mass., professor emeritus in MIT's Department of Mathematics, died on Monday, April 12 at the age of 85. He served on the MIT mathematics faculty from 1949-85.

Whitehead was one of the world's leading algebriac topologist and homotopy theorists. His 1941 doctoral thesis at the University of Chicago, "Homotopy Properties of the Real Orthogonal Groups," set the tone for his research, mixing geometric and algebraic methods to obtain important results in homotopy theory (homotopy is a continuous transformation from one mapping to another in a topological space) .

Over the ensuing two decades, Whitehead contributed to one of the major creations of postwar mathematics: algebraic topology as it is known today. He was among the first to master the technology of spectral sequences and used it, along with Henri Cartan and Jean-Pierre Serre independently in France, to initiate a systematic calculation of the homotopy groups of spheres -- still a touchstone in the subject.

Whitehead received a number of distinctions for his research and service. He was elected a member of the National Academy of Sciences in 1972 and a Fellow of the American Academy of Arts and Sciences in 1954. He was a Guggenheim Fellow and Fulbright Research Scholar from 1955-56, and a National Science Foundation Senior Fellow from 1965-66.

Born in Bloomington, Ill., on August 2, 1918, Whitehead received the S.B., S.M. and Ph.D. degrees from the University of Chicago. He was an instructor at Purdue and Princeton from 1941-47 and a faculty member at Brown University before coming to MIT in 1949. He was named a full professor in 1957. He is survived by his wife, Kay Whitehead.

Magma beneath tectonic collision zones is wetter than previously thought

New findings may help explain how Earth’s crust forms, the location of ore deposits, and why some volcanoes are more explosive than others.