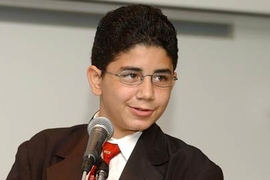 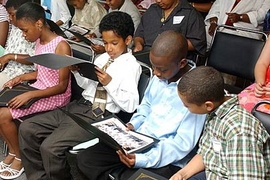 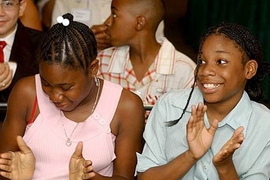 Some 38 sixth, seventh and eighth grade students from Boston public schools will make monthly visits to the campus this academic year as part of a new MIT program designed to reinforce math and science skills and encourage the students to pursue these fields.

The Science Technology Engineering Math (STEM) program also introduces the youngsters to people from similar backgrounds who are turning math and science knowledge into successful careers. Recently the Boston students completed the first component of STEM, an intensive five-week academic program taught by MIT students and young alumni on subjects including algebraic topology and descriptive geometry.

STEM, which is free, is already making an impact.

"This program is very important to the students because we know that school will be less of a struggle because of our exposure; we have a head start, an advantage that the other students in school won't have," said Zawris PeÃ±a, a 13-year-old participant who will be a seventh grader at the McCormack Middle School.

"We have learned chemistry and physics in five weeks. How much harder can it get in regular school?" PeÃ±a told his co-participants in a speech at the final banquet.

"In this program I learned about things I never heard of, like elements in chemistry and kinematics in physics. There was always something new we had to learn each day. My friends at home have never even heard of the material we are learning, and this gives me a sense of accomplishment," said PeÃ±a.

"As research has shown, if you set high expectations and convey them in word, deed and symbol (with teachers who 'look like them'), these kids will respond," said Reid, whose office runs STEM and a variety of related programs including the Minority Introduction to Engineering, Entrepreneurship and Science (MITE2S) Program, which is almost 30 years old, and the Saturday Engineering, Enrichment and Discovery (SEED) Academy, started in 2002.

"With MITE2S and the SEED Academy, we have a track record of working with students near the transition from high school to college. STEM is an extension of that to middle-school students," said Nicole Stark, who coordinates the STEM and SEED programs.

In addition to the summer program, which was leavened with squash lessons, and monthly school-year visits with MIT student mentors, there is a third key element of STEM. Twice a semester, the kids' parents attend workshops designed to "inform and empower them in their efforts to support their children's academic success," Reid said. "The workshops will cover everything from preparing kids for college to becoming better advocates for their kids in the public school system."

STEM was developed in partnership with the Center for the Advancement of Hispanics in Science and Engineering Education (CAHSEE) and with support from the Charles Hayden Foundation, the Lord Foundation and MIT. CAHSEE has instituted similar programs at several different sites around the country over the last ten years. "We've adopted their model here at MIT," Reid said.