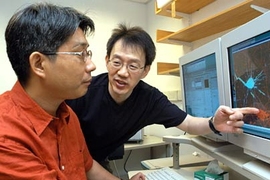 A tiny molecular change quickly and significantly alters the number of receptors on the surface of synapses, a neuroscientist at MIT's Picower Center for Learning and Memory reports in the July 22 issue of Neuron. Because more receptors mean stronger connections between brain cells, manipulating this process may one day provide a means of boosting brainpower in the hippocampus, where long-term memories are stored.

Morgan Sheng, the Menicon Professor of Neuroscience at the Picower Center, seeks to understand at the molecular level how brain cells build and eliminate synapses (the connections between brain cells). In this latest work, Sheng and MIT postdoctoral fellow Sang Hyoung Lee found that a glutamate receptor subunit called GluR2 is the traffic cop in charge of directing postsynaptic glutamate receptors (called AMPA receptors) from the cell surface to the inside of the cell, thereby weakening synapses.

Glutamate, a common amino acid, is a major neurotransmitter in the central nervous system. Glutamate acts as a messenger, working with receptors on the surface of synapses to transmit information from one neuron to another.

Sheng, who is a Howard Hughes Medical Institute investigator, shows in the Neuron paper for the first time that GluR2 is key to controlling the recycling and breakdown of AMPA receptors after they are redistributed to internal pools within the cell.

"This system is in equilibrium, and GluR2 can quickly and in large magnitude alter that equilibrium, force it to shift. This could be another way to get more receptors to the surface of the synapse,"
said Sheng.

Little is known about how AMPA receptors are removed from synapses, but it is known that their removal helps in the crucial function of eliminating poorly used synapses. The brain maintains dynamically a huge number of synapses, eliminating some and strengthening others. This process is the basis for learning and memory.