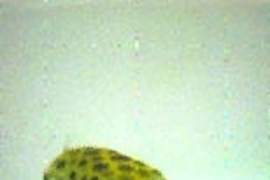 An international team of scientists, including several from the Broad Institute of MIT and Harvard, has decoded the smallest known vertebrate genome--the puffer fish or Tetraodon nigroviridis. The fish's 21 chromosomes, which together contain more than 300 million letters of DNA, tell a twisting evolutionary tale and even shed light on our own genetic makeup.

Comparison with other genome sequences shows that fish proteins have diverged much faster than those in mammals, the team reports in the Oct. 21 issue of Nature. Tetraodon contains several key genes previously thought to be absent from fish.

Further, comparison with the human genome suggests about 900 previously unannotated human genes. Most genes in the human DNA sequence have two counterparts in the Tetraodon genome, the researchers add, showing that the ancestors of this fish must have undergone a genome duplication at some point. Indeed, the Tetraodon sequence may even give us a window on the last common ancestor of Tetraodon and humans--a primitive bony fish that lived hundreds of millions of years ago.

This work was supported by the Consortium National de Recherche en Genomique.

A version of this article appeared in MIT Tech Talk on November 3, 2004 (download PDF).