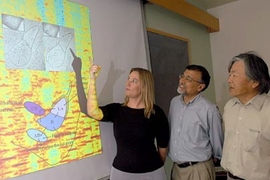 ↓ Download Image
Caption: MIT post-doc Jessica R. Newton points at a respresentation of a section of a mouse's brain that had been "rewired" to receive visual cues in the hearing region of its brain. Looking on are neuroscience professor Mriganka Sur, center, head of the Department of Brain and Cognititve Sciences, and Susumu Tonegawa, director of the Picower Center for Learning and Memory at MIT.
Credits: Photo / Donna Coveney

Caption:
MIT post-doc Jessica R. Newton points at a respresentation of a section of a mouse's brain that had been "rewired" to receive visual cues in the hearing region of its brain. Looking on are neuroscience professor Mriganka Sur, center, head of the Department of Brain and Cognititve Sciences, and Susumu Tonegawa, director of the Picower Center for Learning and Memory at MIT.
Credits:
Photo / Donna Coveney

Mice "rewired" to receive visual cues in the hearing region of their brains learned to respond to a fear-inducing flashing light as if they had heard it instead of seen it, researchers from MIT's Picower Center for Learning and Memory report in the Aug. 22 online issue of Nature Neuroscience.

This research shows that even the adult brain is far more plastic, or adaptable, than previously believed. If extended to humans, this may mean that in the future, individuals with brain damage from aging, disease or injury may be able to have stimuli from the outside world routed in new ways to major brain structures--even those responsible for emotional responses and learning.

This work also sheds light on how emotional responses are learned, illustrating the ability of widely different external stimuli to elicit a common emotion such as fear. The research is the result of a collaboration between the laboratories of Mriganka Sur, the Sherman Fairchild Professor of Neuroscience and head of the MIT Department of Brain and Cognitive Sciences, and Susumu Tonegawa, director of the Picower Center and professor of biology.

"This paper demonstrates that novel pathways can lead to novel learning. This points to the tremendous plasticity of emotional responses in the brain," Sur said. Sur's laboratory showed in 2000 that when an animal's brain is rewired so that visual input is directed to the auditory cortex, this "hearing" part of the brain is able to respond to visual stimuli. The latest work goes one step farther. It shows that a brain structure responsible for an emotional response also can accept information from unusual sources and learn from a novel association.

Mice typically acquire a fear response more quickly if a signal tied to danger is a sound rather than a light. In this study, mice learned that a certain sound preceded a mild shock to one foot. After only one repetition, the mice froze in fear when they heard the sound. In contrast, mice that received a shock in connection with a visual cue had to experience many more repetitions before they realized that the light meant that a shock was coming.

In this experiment, the "rewired" mice that had visual information routed to the hearing part of their brains rather than to the visual part learned more rapidly to equate the light with the shock. The visual information was passed on, as if it was a sound, from the auditory part of their thalamus to the amygdala, a structure deep within the brain critical for fear conditioning behavior.

"Visual inputs are able to use a pathway from the auditory thalamus to the amygdala to induce a learned behavior in rewired mice," Sur said. "Thus, novel pathways can not only sustain perception, but also can be utilized in adulthood for learning.

"Furthermore, the amygdala is not intrinsically prevented from learning visual associations; visual activation of the right input pathways can induce emotional responses that are normally induced by hearing alone," he said. The research shows that brain pathways in adults are even more plastic, or adaptable, than previously believed.

This work is supported by the National Institutes of Health.