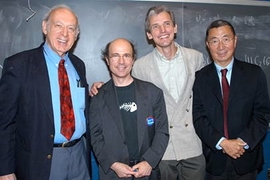 "I'm very happy and relieved," Wilczek said about winning the Nobel Prize. "I'd be lying if I said that it came as a shock. I've thought for a long time that the theory is very, very important." He shared the Nobel Prize with two other researchers for the theory of asymptotic freedom in quarks, which is key to interpretating most experimental studies involving modern particle accelerators.

"I've had an unpleasant week and a sleepless night" during the week the Nobels were announced for the last several years, Wilczek said. "And I'm very glad that that's all over with."

He also thanked the United States "for supplying the system of education" that worked so well for him. "I'm a public school guy all the way," he said. Wilczek graduated from Martin Van Buren High school in Queens, N.Y.

The list also included Wilczek's wife. "It was during the time that I was meeting and courting Betsy that I did the work, and I don't think that's a coincidence," he said to laughter from the crowd of students and faculty who had gathered in the Marlar Lounge (Room 37-252).

Devine later shared an anecdote about meeting her husband. It was 1972 and they were graduate students at Princeton. (Devine earned the M.Eng.) Wilczek was among the students who watched and heckled the TV during broadcasts of Bobby Fisher vs. Boris Spassky chess games.

"I noticed that whatever moves Frank called out, the players would do what he said. They'd make the moves he predicted. This happened even when what he called out was different from what others called out," recalled Devine.

During the press conference, Wilczek stressed that the three new laureates' achievements were "not out of thin air -- we stood on the shoulders of giants, a few reasonably tall people, and lots of average-height people," he said, referring to the many physicists who laid the foundation for his own work. They include Institute Professor Jerome Friedman, who won the 1990 Nobel prize in physics with the late Professor Henry W. Kendall, also of MIT, and Richard E. Taylor of the Stanford Linear Accelerator Center.

Finally, Wilczek tipped his hat to Mother Nature "for her good taste in choice of principles, symmetry and rationality."

Wilczek was joined at the press conference by three of the nine other Nobel laureates currently on the MIT faculty: Jerome Friedman, Wolfgang Ketterle and Samuel Ting. Marc Kastner, head of the Department of Physics, and Provost Robert Brown introduced Wilczek.

"Frank Wilczek is a luminary," said Kastner. "He is one of the great minds of modern physics."

A version of this article appeared in MIT Tech Talk on October 6, 2004 (download PDF).