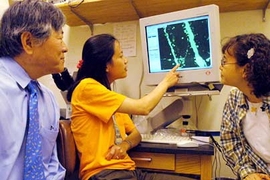 In a study to appear in the June 10 issue of Neuron, neuroscientists at the Picower Center for Learning and Memory at MIT show for the first time that storage of long-term memories depends on the size and shape of synapses among neurons in the outer part of the brain, the cerebral cortex.

This confirms what scientists have long suspected--that there are physical places in the brain that are repositories for all our knowledge, experience and memory. When an experience or a fact is repeated enough or elicits a powerful emotional response, it shifts from short- to long-term memory. It moves from the hippocampus, in the innermost fold of the temporal lobe, to the brain's outermost region, the cortex, which controls higher functions like abstract thought and speech. MIT researchers studied how structural and functional alterations of synapses--physical and chemical connections among neurons--in the cortex affect the animal's ability to store long-term memory.

The MIT research provides the first evidence that synaptic structure and function in the cortex are critical for their long-term storage as memories are transferred from the hippocampus to the cortex.

Mansuo L. Hayashi, research affiliate at the Picower Center; Susumu Tonegawa, Director of the Picower Center and laureate of the 1987 Nobel Prize; and colleagues at Johns Hopkins University and the Tata Institute for Fundamental Research in India created mutant mice with abnormally structured synapses in their cortexes. The synapses in their hippocampuses were normal. "We showed their formation of memories is fine," Hayashi said. "However, their long-term storage is impaired."

Like regular mice, the mutant mice were able to find their way around a water maze in which they had to swim to a hidden platform with the help of visual cues on the wall. Although mice can swim, they don't like water. The mutant mice learned the location of the platform, but after a few weeks, they couldn't remember where it was. The normal mice swam right to it.

The work also provides insights into the memory deficits and cognitive dysfunction in mentally retarded patients. Many of the genes tied to mental retardation regulate the way synapses are formed. Abnormal synapses apparently are responsible for the cognitive problems associated with mental retardation.

PAK (p21-activated kinase), a critical regulator of synaptic architecture, was inhibited in the mutant mice. In humans, the gene that encodes this enzyme is tied to mental retardation. "Overall, we believe that one of the underlying mechanisms for mental retardation is synaptic malformation that leads to cognitive dysfunction," Hayashi said. "One of the most significant findings of this study is that the structure of synapses links to the function of synapses, and the size of synapses reflect the strength of the synapse. The bigger the synapse, the more vesicles to carry more neurotransmitters and the more channel proteins to permeate and bind to the neurotransmitters."

This work is supported by the National Institutes of Health, Howard Hughes Medical Institute and RIKEN.