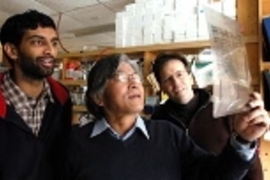 The study, which will appear in the Feb. 6 issue of the journal Cell, has broad implications for our understanding of how learning and memory normally occur, and how these abilities may be undermined in psychiatric and neurologic diseases.

Long-lasting memories are stored in the brain through strengthening of the connections, or synapses, between neurons. Researchers have known for many years that neurons must turn on the synthesis of new proteins for long-term memory storage and synaptic strengthening to occur, but the mechanisms by which neurons accomplish these tasks have remained elusive.

The MIT research team, led by Nobel laureate Susumu Tonegawa, director of the Picower Center for Learning and Memory, has now identified a crucial molecular pathway that allows neurons to boost their production of new proteins rapidly during long-term memory formation and synaptic strengthening.

"What we have discovered that hasn't been established before is that there is a direct activational signal from the synapse to the protein synthesis machinery," said Tonegawa, the Picower Professor of Biology and Neuroscience in MIT's Departments of Brain and Cognitive Sciences and Biology. The central component of this pathway, an enzyme called "mitogen-activated protein kinase" (MAPK), effectively provides a molecular switch that triggers long-term memory storage by mobilizing the protein synthesis machinery.

Acting on a hunch that MAPK might be an important part of such a "memory switch," Ray Kelleher, a postdoctoral fellow in Tonegawa's laboratory and lead author of the study, created mutant mice in which the function of MAPK was selectively inactivated in the adult brain. Intriguingly, he found that these mutant mice were deficient in long-term memory storage. In contrast to normal mice's ability to remember a behavioral task for weeks, the mutant mice could remember the task for only a few hours. Similarly, the researchers found that synaptic strengthening was also much more short-lived in neurons from the mutant mice than in neurons from normal mice.

Realizing that the pattern of impairments in mutant mice suggested a problem with the production of new proteins, the researchers then performed an elegant series of experiments that revealed precisely how MAPK translates synaptic stimulation into increased protein synthesis. Based on molecular comparisons of neurons from normal and mutant mice, they found that synaptic stimulation normally activates MAPK, and the activated form of MAPK in turn activates several key components of the protein synthesis machinery. This direct regulation of the protein synthesis machinery helps explain the observation that activation of MAPK enhanced the production of a broad range of neuronal proteins.

An immediate question that Tonegawa and colleagues are pursuing is how neurons target the newly synthesized proteins to the specific synapses participating in memory formation while not modifying other synapses.

In addition to Tonegawa and Kelleher, the study's other authors (all in Tonegawa's lab) are graduate student Arvind Govindarajan and postdoctoral fellows Hae-Yoon Jung and Hyejin Kang.

About the potential clinical impact of the study, Tonegawa observed, "As we continue to map out the molecular and cellular mechanisms of cognitive function, we will better understand the basis of disorders of memory impairment. Improved understanding makes it far more likely that we can develop drugs for specific molecular targets."

Defects in the strengthening and growth of synaptic connections are associated with a variety of psychiatric and neurologic conditions affecting the developing and adult brain, raising the possibility that disturbances in the mechanism identified in this study may contribute to these disorders, said Tonegawa. The next step will be to determine whether abnormalities in the regulation of protein synthesis can be identified in the affected brain regions in specific neuropsychiatric disorders.

The study was supported by the National Institutes of Health, the Howard Hughes Medical Institute and the RIKEN Brain Science Institute.