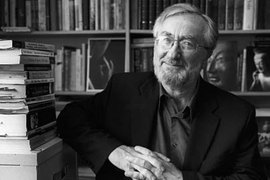 An MIT historian who won both the National Book Award and the Pulitzer Prize for Nonfiction has been awarded a Mellon Distinguished Achievement Award in recognition of scholarship that has contributed decisively to the study of history and promises to influence teaching and learning in the humanities at large.

John W. Dower, Ford International Professor of History, was formally notified on Friday, December 17, that he had won the prestigious humanities award, which provides funds of up to $1.5 million to deepen and extend humanistic scholarship over a 3-year period. The funds will be granted to, and overseen by, MIT.

Philip S. Khoury, Kenan Sahin Dean of the School of Humanities, Arts, and Social Sciences and professor of history, said, "John Dower is so deserving of the Mellon Distinguished Achievement Award. He is widely considered the most distinguished historian of modern Japan and of Japanese-U.S. relations in the West."

Dower was "caught completely by surprise" by the award, yet the funds come "right at the point when it looks like we can take off with a project to wed humanities at MIT with new technological opportunities and change the way we talk about and teach historical materials," he said.

Dower specializes in the history of Japan. He is the author of "Embracing Defeat: Japan in the Wake of World War II," winner of the 2000 Pulitzer Prize and the National Book Award, among other prizes. The book portrays Japan and Japanese-American relations between August 1945 and April 1952 and explores the still-rippling effect of Gen. Douglas MacArthur's occupation policies. His other books include "War Without Mercy: Race and Power in the Pacific War," winner of the 1986 National Critics' Circle Award for nonfiction and the Masayoshi Ohira Memorial Prize in Japan.

But the Mellon Award is one both for acclaim and anticipation, and Dower's recent and planned projects move from the printed page to the interactive and visually lively screen. In 2002, he and Shigeru Miyagawa, MIT professor of linguistics and Japanese, developed several projects, including an online course and an exhibit on Commodore Perry's "black ships," in which "text wrapped around visual materials. Our course, 'Visualizing Cultures,' will be the model for this new way of using technology to present complex academic material. I'd like to see this work made accessible in the public realm; I'd like it to become a new way of doing public education," Dower said.

The Mellon funds will be especially helpful in offsetting the costs of developing the "Visualizing Cultures" project, which had received internal MIT support through the D'Arbeloff fund, Dower noted. "This work is expensive. We'd like to develop a new database for visual materials; we need software designers and research assistants; and we'll be working in two languages at least. It's exciting to be able to take this to the next level," Dower said.

Dower's history courses at MIT cover the full range of Japanese history from ancient to modern times. His expertise in visual representation is reflected in courses such as "World War II in Asia: Film, Fantasy, Fact" and "Japan in the Age of the Samurai: History and Film."

Dower traces developments within his own approach to history and use of historical materials back to the 1960s and 1970s, when the disparity between official documents of events such as the Vietnam War and Watergate and lived experience became painfully clear. At that time, technology -- television, film, and audio recordings - revealed much more than the published record about history as it was occurring in human life.

In addition, Dower has said elsewhere that relations between the so-called East and West have been burdened by the superficial concept of 'clash of civilizations.' "When you try to examine cultures in all their complexity, however, looking at examples of authority, patriotism, protest, creativity, or kindness, you also come to see how much we share, whether in the basic characteristics of human nature or in responding to the challenges of the modern world," he said.

Dower, 66, came to MIT in 1991. He has been widely recognized for his scholarly and innovative use of visual materials and other expressions of popular culture in reexamining Japanese history. He has published books on Japanese design and Japanese photography as well as on the collaborative "Hiroshima Panels" by two Japanese painters, Iri Maruki and Toshi Maruki. In 1986, he was executive producer of "Hellfire: A Journey from Hiroshima," a documentary film on the art of the Marukis, which was nominated for an Academy Award. His 1979 book "Empire and Aftermath: Yoshida Shigeru and the Japanese Experience, 1878-1954," became a bestseller in Japanese translation.

Professor Dower is a fellow of the American Academy of Arts and Sciences. He received the B.A. from Amherst College and the M.A. and Ph.D. from Harvard University. At MIT, he was the Henry R. Luce Professor of International Cooperation from 1991-96 and the Elting E. Morison Professor of History from 1996-2003.