Adele Santos to be dean of architecture 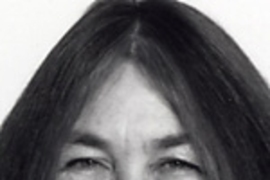 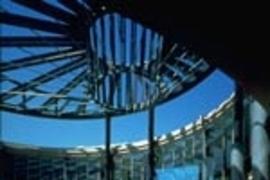 ↓ Download Image
Caption: The courtyard of the Center for the Arts, designed by Santos, at Albright College in Reading, Pa.

Caption:
The courtyard of the Center for the Arts, designed by Santos, at Albright College in Reading, Pa.

Adele Naude Santos, an internationally acclaimed architect and urban designer and highly respected educator, has been appointed dean of the MIT School of Architecture and Planning, effective Feb. 2.

"The school has a vision of design which appears to me to be humanistic, socially responsible and technologically sophisticated," Santos said after her appointment was announced by Provost Robert A. Brown. "I feel that this resonates with my work and design philosophy.

"The disciplines in the school--architecture, urban design and planning with media arts and sciences--have the potential to create an amazing synergy if we take greater advantage of being part of MIT. I think the design professions are at a moment of flux, and that this school can play a strong leadership role in charting the future," she said.

A native of South Africa, Santos began practicing architecture in 1968 and was swiftly recognized for her sculptural, spatially inventive designs. She is committed to creating intensely livable spaces which are also environmentally responsive.

Her earliest projects, built in South Africa, Swaziland and Botswana, included affordable and luxury housing as well as institutional buildings with very low budgets. She later completed projects throughout the United States and in Japan.

Santos designed the Institute of Contemporary Art in Philadelphia; the Center for the Arts for Albright College in Reading, Pa.; the Yerba Buena Gardens Children's Center in San Francisco; and the Franklin/La Brea Family Housing complex, an affordable housing project in Hollywood.

She has described the Franklin/La Brea complex as a "very successful housing environment, the result of a lengthy public process. I always start with the social issues because that's where my ethos is."

Santos work was recently exhibited in a solo show at the Museum of Modern Art in Kitakyushu, Japan. Her work has also has been widely published in journals, including Progressive Architecture and Metropolitan Home (New York), Domus (Milan), and Toshi Jukatu, Nikkei Architecture and Japan Architect (Tokyo). A retrospective of her work was recently published in L'Archittetura (Rome), one of the leading international journals of architecture.

She is currently principal architect in the San Francisco-based firm, Santos Prescott and Associates.

Santos was professor of architecture in the College of Environmental Design at the University of California at Berkeley from 1995 to 2003 and the founding dean of the School of Architecture at the University of California at San Diego from 1990-94. "I accepted the position as founding dean because I believed it was time to create a new model for architectural education. I have a strong belief that schools of architecture can uniquely contribute to problem-solving in the built environment," Santos has said.

Santos was a professor of architecture and urban design at the University of Pennsylvania (1981-90) and chair of the architecture department from 1981-87. She taught at Harvard University Graduate School of Design (1979-81) and at Rice University (1973-79). Her courses have included design studios that focused on housing and community development.

"I have always combined teaching and practice and seen my practice as a form of research. My academic focus has been the design of housing environments. Courses in urban design, particularly interdisciplinary ones in which architecture and landscape students collaborate, address unsolved problems in our urban environment," Santos said.

"Adele is a widely admired designer and educator," said Associate Dean Terry Knight, who has served as interim dean since William J. Mitchell stepped down last summer. "She's passionate about design, she has a lively and generous spirit and intellect, and she's ready to engage in the wide-ranging interests and activities in the school. She will move the school forward in exciting new directions."

Mitchell, who now heads the Program in Media Arts and Sciences, said, "Given the current political and economic climates, Adele will face some tough challenges. It will be particularly important to effectively champion the school's ideals of progressive and adventurous design, social justice, and cultural breadth and diversity. But she will bring a lot of energy and optimism to the task, and some interesting new perspectives. I look forward to working with her."

Santos' involvement with design and planning extends beyond her practice and academia to embrace civic dimensions. She serves as a juror for numerous national and international design competitions and awards programs. For the last two years she was president of the International Design Conference in Aspen, Colo.

Adele Santos' range as a designer and her commitment to the responsive interplay between building design and civic life are reflected in these recent projects:

FuturePlex, a 1.3-million-square-foot development in San Francisco designed to be certified under the LEED rating system by the U.S. Green Building Council (2000).

"Light on Learning," a study funded by Pacific Gas & Electric to develop prototypes for day lighting in California schools (2000).

Penn Children's Center--winning project in a competition to design a child care center at the University of Pennsylvania. With a rooftop play yard and classrooms looking into a protected, landscaped courtyard, the project provides an amenable environment for children on a constrained urban site (1999).

New facilities for the Please Touch Museum in Philadelphia (1998).

A version of this article appeared in MIT Tech Talk on January 14, 2004.